Beatle Mania at the Ritz 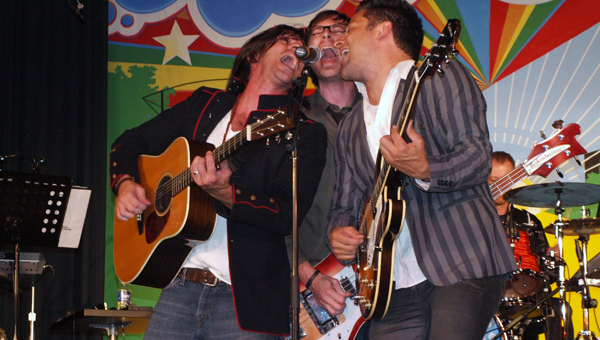 Ryan, Matthew and Billy McGuigan harmonize together on one of the many Beatles classics they performed Monday night during “Yesterday and Today.” The three Omaha natives were joined by four other musicians to bring the Fab Four’s tunes to life on the Ritz stage for an enthusiastic crowd. (Photo, Angie Long)

Just a handful of the cornucopia of Beatles hits performed by a talented group of musicians bringing “Yesterday and Today: The Interactive Beatles Experience” to Greenville.

The watchword for the night was “energy,” with many attendees commenting on just how much, energy, enthusiasm and passion for the music of the Fab Four was exhibited by the three McGuigan brothers from Omaha, Nebraska and their fellow band mates during the Greenville Area Arts Council production.

“They loved what they were doing so much, you could just feel it,” said Susie Snow. “They were determined to get the audience involved and having as much fun as they did.”

The band members read out song requests, urged audience members to sing along and even invited a few to dance down front.

Ryan McGuigan, the middle brother and “our own personal Jonas Brother,” as big brother Billy quipped, said the siblings enjoy performing together (“We used to always fight as kids. Now we get along”) and travel via RV to most of their gigs.

“We all love the music. It stands the test of time.  Our dad passed that down to us,” McGuigan said in his Midwestern twang.