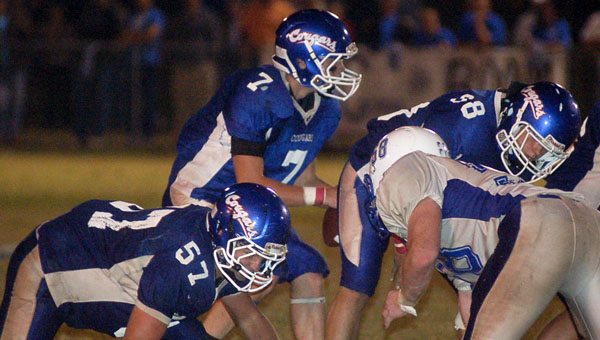 Quarterback Pete King and the Cougars claimed a 21-18 win after being down 18-0.

The CCA Cougars held the lead for less than a minute over Lakeside, but CCA had it at the most crucial time: when the clock ran out.

The Cougars drove down the field in the final minutes of the game, and after converting a fourth-and-inches at the Lakeside 38-yard-line with a minute to play, Austin Brown came up with a pair of game-saving catches.

The first was a catch to move CCA inside the 30-yard line, but the second was the biggest play of the night.

With 20 seconds left in the game, Brown snagged the game-winning reception in the front corner of the endzone on a perfect throw from quarterback Pete King.

Kyle Furr added the two-point conversion, and CCA was able to pull out the 21-18 victory.

It was an improbable comeback — the Cougars trailed 18-0 at one point early in the second half.

“They just whipped us on both sides of the ball in the first half,” said head coach Roland Jones. “I told them at halftime that we were just getting whipped, and we made a few adjustments in the second half.”

“They didn’t do anything we weren’t prepared for, but we just didn’t have the right mindset and they took advantage of that,” he said.

Down 18-0, King found Michael D’Arville for a six-yard touchdown pass with 5:52 left in the third quarter.

Just over three minutes later, King rushed it in from two yards out to make the score 18-13.

“We never quit,” Jones said. “I also can’t say enough about the great game Austin Brown played.  This was a big win for us.  They played hard and they’re a good football team.”

D’Arville was the leading receiver with five catches for 58 yards and a touchdown, but Brown was close behind with three catches for 44 yards.

Overall, the Cougars had 113 yards of offense on the ground.

Rann Smyth led the team with 11 tackles, while Shaun Lewis had eight tackles, including two assists.

The dramatic victory kept CCA perfect on the season at 7-0.