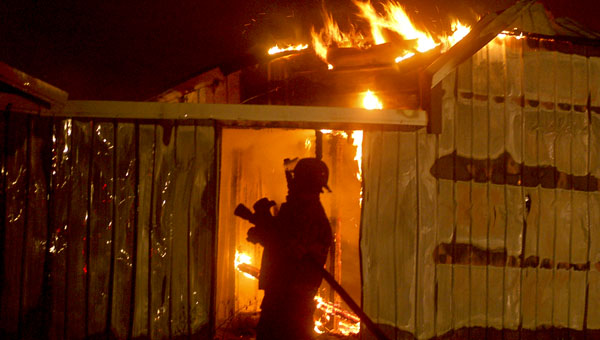 A firefighter holds a hose while fighting a chicken house fire Saturday night.

A Saturday night fire at a chicken house in the Vidette community ended with the total loss of one house and 5,000 chickens.
The call came in just before 9 p.m. as a brush fire, but after firefighters responded, they found a 400 x 50-foot chicken house engulfed in flames.
In addition to the Luverne Fire Department, volunteer firefighters from Northeast Crenshaw, Goshen, Rutledge, Glenwood and Fuller’s Crossroads responded to the blaze.
“Since everyone was out, Brantley’s fire department came and covered our station,” said Luverne assistant fire chief W.A. Neal. “We really appreciate all the other departments responding and helping.”
While one chicken house was a total loss, firefighters were able to keep the fire from spreading to a second house.
The incident is still under investigation, and no official cause has been determined.
You Might Like

Quarterback Pete King and the Cougars claimed a 21-18 win after being down 18-0. The CCA Cougars held the lead... read more