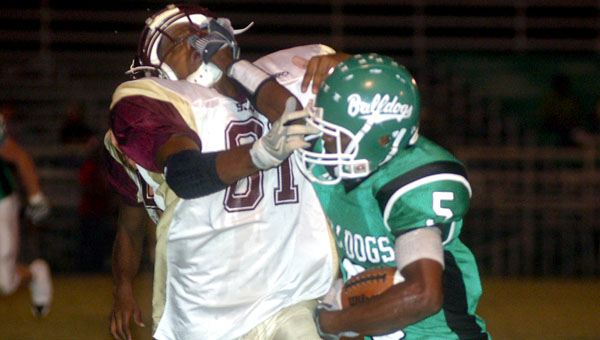 Brantley's Devonte Porter delivers a stiff-arm in the homecoming win over J.F. Shields.

After a slow start, the Brantley Bulldogs came to life and claimed a 56-6 homecoming win over J.F. Shields.

Shields actually drew first blood in the game with a 73-yard pass on third and long to go up 6-0.

From there, it was all Brantley.

The Bulldogs moved down the field courtesy of some big runs by Devonte Porter, and Justus Harvey capped the drive with a 13-yard touchdown pass to Adam Hill.

Facing third down and long, the Panthers again attempted a long pass, but Terence Bogen came up with the interception for Brantley.

The ensuing drive stalled, but a muffed punt gave Brantley the ball at Shields’ seven-yard line.

Porter took the first play to the endzone to make the score 12-6.

Late in the first quarter, Brantley capitalized on some solid field position to extend the lead.

The Bulldogs started a drive at Shields’ 20-yard line, and Porter scored on a nine-yard rush.
Porter also had a punt return to the Panthers’ 11-yard line.

While it looked like the drive might stall, Zach Wiley scored from three yards out on fourth down to make the score 27-6.

Hill helped Brantley add three more points to the board by nailing a 33-yard field goal with 3:01 left in the half, and Wiley slipped through the defense for a 28-yard touchdown run two and a half minutes later.

In the second half, Porter returned a punt 55 yards for a touchdown, and both quarterback Andrew Lowery and Nick Brady had touchdown runs from four yards out.

“We were able to get a lot of people in the game,” said head coach David Lowery. “It’s always good to get some experience for the younger guys.”

The Bulldogs are now 7-0 on the season.