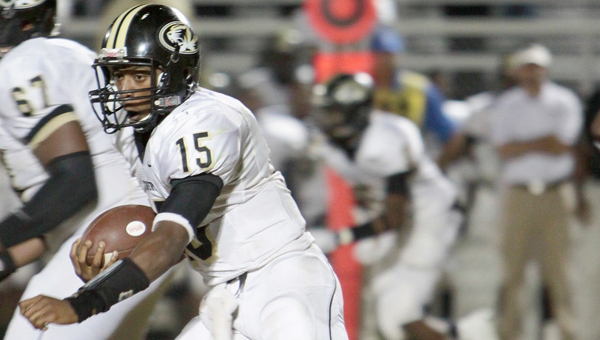 Greenville’s Kent Riley had a 74-yard touchdown run against Demopolis. The Tigers dropped to 5-2 on the year.

By Jeremy Smith
The Demopolis Times

Demopolis is one game closer to clinching the Class 5A, Region 3 crown after a 44-34 win over Greenville Friday night.

With the game still hanging in the balance, DaMarcus James pushed his 24th and final carry of the night into the end zone for a three-yard score, stretching the Tiger lead to two possessions with less than a minute to play.

James finished his night with 248 yards and three touchdowns on 24 carries for Demopolis.

While James’ contributions were consistent and considerable, the Demopolis offense struck out of the gate with a two-play, 65-yard drive that saw Ben Pettus find James Wilson for a 33-yard pass before finding running room on a 32-yard touchdown dash.

The missed extra-point that followed the score left Demopolis up 6-0 and kept all of the momentum from being squarely on the home sideline.

Greenville answered quickly with an eight-play, 62-yard drive that saw quarterback Kent Riley confound and frustrate the Demopolis defense for much of the possession before Jamall Hamilton capped the march with a seven-yard scoring run. Poised to take the lead, Greenville botched the point after attempt to keep the game tied.

Demopolis answered in kind on its next possession, using eight plays to go 65 yards and retake the lead on a nine-yard scoring run by James. Cameron Fendley’s extra-point put Demopolis up 13-6.

The visiting Tigers replied with a 10-play, 81-yard march that ended with an 11-yard touchdown run by Riley to tie the game again.

Demopolis needed very little time to find paydirt again as Pettus hit Wilson for a 76-yard scoring pass to put DHS back on top. After the home Tigers pitched the first defensive stop of the night on the ensuing possession, James rumbled 50 yards for another Demopolis touchdown, putting the Tigers up 27-13.

Greenville answered back with an eight-play, 75-yard drive that ended with a 26-yard touchdown run by Fernandez Grey. Demopolis turned the ball over on downs after a promising drive stalled and needed an interception to end Greenville’s final possession of the first half.

James recovered a fumble on the opening possession of the first half which led to a 26-yard field goal from Fendley to push the Demopolis lead to 30-20.

Greenville proceeded to milk the clock and drain the Demopolis defense on a 15-play drive that covered 74 yards of Tiger Stadium turf and ended with a four-yard scoring run by Patrick Bedgood.

Demopolis moved the lead to 37-27 on the ensuing possession when Pettus went over the top to Kiandre Adams for a 34-yard touchdown pass.