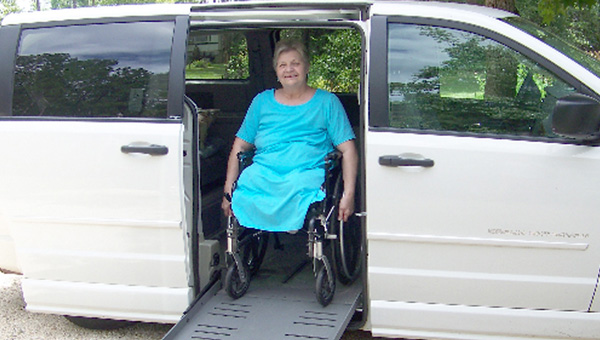 Martha Jo Huggins of Georgiana with her new van.

By Susanna Gaston
Special To The Advocate

A person’s life can change in the blink of an eye.

One woman’s world was turned upside down in just one day.

She went from having full mobility to being in a wheelchair for life.

Martha Jo Huggins, a Georgiana native, was diagnosed with an unknown blood disorder in May 2006.

It all began with blood clots and poor circulation in her legs. First her toes started turning blue. The doctors put stints in, but it was to no avail. Finally, Huggins had to have both legs amputated.

She has been confined to a wheelchair ever since. Her husband, Deryl Wayne, had to lift her in and out of the car, making traveling difficult. Huggins was forced to miss out on special occasions such as family gatherings and grandchildren’s’ activities due to limited mobility.

In January 2010, however, her life changed again.

The Three Arts Club of Georgiana and Chapman, a women’s service organization of approximately twenty members which sees needs within the community and addresses them, presented Huggins with a check for $23,000 that would cover the cost of a handicap-accessible van.

This was an unprecedented amount of money for any small organization, but the need was great, as was the generosity of the members of this organization.

Huggins’ world was completely turned around. She went from being homebound to being able to travel to Florida for her grandson’s ballgames.

She is now free to go more places that would never have been possible without the help of the Three Arts Club.

Huggins’ life was changed for the better, but so were the lives of the members of the Three Arts Club.

The Three Arts Club is celebrating its eighty-eighth year of service.