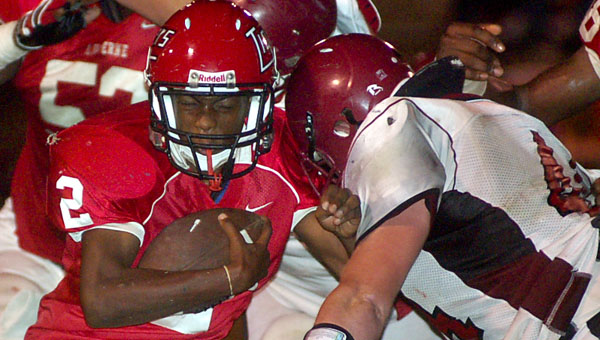 After a close first half, the Luverne Tigers stepped it up to claim a 33-13 homecoming victory over Slocomb.

The Red Tops opened the game with a long kickoff return to Luverne’s 20-yard line, but the defense held Slocomb to only six yards and no points.

Luverne quarterback Tige Townsend scored on a 29-yard run, but it was called back for a block in the back.

Jamarcus June helped move Luverne to the one-yard line, and Townsend punched it in with 3:07 to go in the first quarter to put LHS ahead 7-0.

The rest of the first half was a defensive battle, and special teams got Slocomb’s first touchdown.

The Tigers fumbled on a punt return, and the Red Tops picked it up and raced 15 yards for a touchdown to tie the game with 3:15 left in the half.

“I didn’t really tell them much at halftime,” said head coach Les Sanders. “I just said that we weren’t fighting out there.  If you don’t play with emotion, you get the same result every time.”

The Tigers came out and put on a show in the second half.

On the first possession, Jonathan Chambers broke a 46-yard run up the middle of the Slocomb defense.

Near the beginning of the fourth quarter, Ladorian Jackson punched it in from a yard out after having several key runs during the drive.

The Tigers took advantage of the best defensive play of the night 30 seconds later.

Dontrell Hall scooped a pass out of the air off a deflection and turned the interception into a 40-yard, untouched interception return to put Luverne up 27-7.

Although Slocomb scored later in the quarter, Jackson added a final touchdown with 1:36 to play.

Sanders said that both Jackson and Chambers stepped up when they were needed, especially since running back Jamarcus June left the game with a broken hand.

“Ladorian ran hard.  He’s not a breakaway runner, but he’s a very hard runner,” Sanders said. “Jonathan hit the holes well and had some big runs for us, especially early in the second half.”

“It’s always good to get a region win,” Sanders added. “We had a great crowd, like we always do, and we really appreciate the support.”