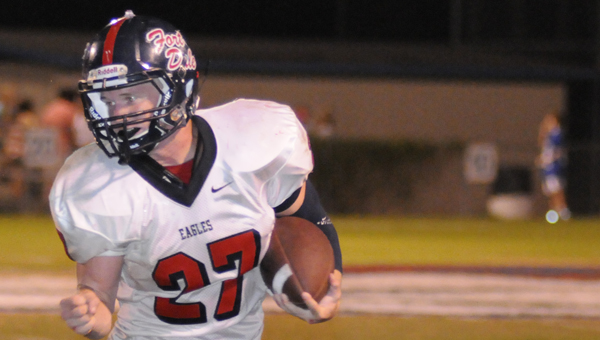 After last week’s game, Coach James “Speed” Sampley said this week’s game versus Monroe would be the toughest his team has played so far.

The Eagles are ranked No. 1 in the AISA by the Alabama Sports Writers Association, while Monroe Academy is ranked No. 4.

However, Sampley said it’s not Monroe that bothers him as much his own team.

“We have turned the ball over seven times in five games,” Sampley said. “And we have averaged 55 yards a game in penalties. This wouldn’t be the end of the world, except these are all stupid penalties.”

Correcting these errors, Sampley said, will be key to victory over Monroe.

“We are keeping other team’s drives alive by giving up so many penalties,” Sampley said. “Monroe doesn’t make many mistakes defensively. They are just solid, and we are going to have do our part to beat this team.”

Sampley said Monroe is well coached, and he expects them to have some speed in the backfield. On top of this, Sampley said their quarterback has started for the past three years and their receivers have been catching the ball as well as anyone he has seen so far.

As for Monroe’s offense, Sampley said they have been running a spread, with a little I-formation mixed in.

“Twenty-five years ago, most football teams ran the same offense week in and week out,” Sampley said. “These days you might face something different every week. You just got to be ready for anything.”

The Eagles are still nursing several injuries, with players like Eli Blackmon and Stuart Matthews still not expected to return this season. Perry Singleton sprained his ankle versus Macon-East and it is still unknown whether he will be ready to play against Monroe.

“I challenge you to find another team with more injuries than us,” Sampley said.

Monroe at Fort Dale: 7 p.m. at the Eagles Nest…FDA’s Sawyer Reeves was recognized by the ASWA for his 10 tackles and two blocked punts in the Eagles’ win over Macon-East last Friday…Fort Dale beat Monroe last season on the road 14-6 in the regular season…the two teams have met 24 times with the Volunteers leading the all-time series 13-11…both teams are averaging over 30 points on offense (MA 31.4, FDA 34)…the Monroe defense has given up just 18 points all season…our pick: The Eagles are hurting – literally. A number of top players are out. Monroe has looked impressive in every outing this season, including a 35-0 dismantling of defending AISA champ Pike Liberal Arts School. The Vols have all the advantages in this one. Except playing at home. But that won’t mean much. Monroe 28, Fort Dale 21.