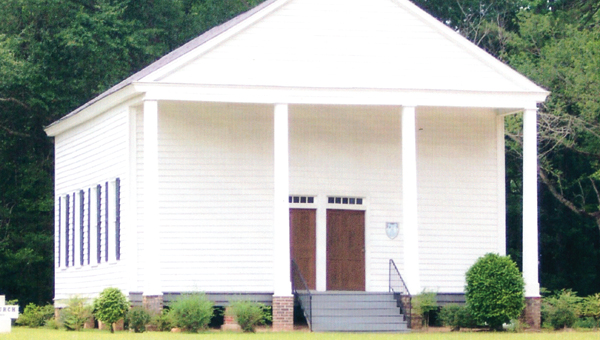 Voices will be lifted in praise and worship as Pine Flat Methodist Church and the Pine Flat Cemetery Association celebrates its annual Homecoming and Memorial Day observance at 11 a.m., Sunday, Oct. 3.

He is a graduate of Troy State University and the New Orleans Baptist Theological Seminary. His message is entitled: “Fighting with the Devil.” The scripture is Acts 17:16. He will portray an actual Methodist Circuit Rider, Sam Porter Jones, at the Pine Flat Methodist Church’s Homecoming (see below).

A traditional “Dinner on the Grounds” will follow the morning service.

Oct. 3 will also serve as the church’s official “Decoration Day” for its historic cemetery.

The Trustees of the Pine Flat Cemetery Association cordially invite all family members, those with ancestral connections and friends to attend the special celebration. Bring folding chairs, folding tables, a basket lunch, and enjoy the great Christian fellowship.

About Sam Porter Jones (1847-1906)
Sam Jones was born in Oak Bowery, just north of Auburn. When his mother, Nancy “Queenie” Porter, died in 1855, Sam, age 10, and his father, John J. Jones, moved to Cartersville, Ga.
His father was a lawyer and he encouraged Sam to study law. In 1868, Sam Jones passed the bar and began his legal profession. Unfortunately, the other “bar” was too attractive and addictive for Sam Jones. Most folks didn’t care to employ the services of a lawyer who used the saloon as an office and tried to represent their client in court in a drunken stupor.
He married Laura McElwain, whom he had met while in Kentucky during the last days of the Civil War. On his deathbed, John Jones pleaded for Sam to stop drinking liquor. He did! And Sam became a Methodist preacher.
Steamboat Captain Thomas Ryman showed up to heckle Jones and he was converted. Ryman built the Union Gospel Tabernacle in Nashville so Rev. Jones, and other ministers, could have a place to preach. In 1905 it was renamed the Ryman Auditorium; the home of the Grand Ole Opry.
Rev. Sam Jones preached primarily this message: “Quit Your Meanness.” They say that Jones’ wry wit and masterful story-telling greatly influenced Will Rogers.
Jones became an ordained Methodist minister in the North Georgia Conference of the Methodist Episcopal Church South in 1872. In 1893, he split with the Methodist Church and became an independent evangelist, traveling to churches across the south to spread the Gospel. He died in 1906, age 59.
It is quite possible that Sam Jones, or another of the famed Methodist Circuit Riders, could have preached at Pine Flat Methodist Church.