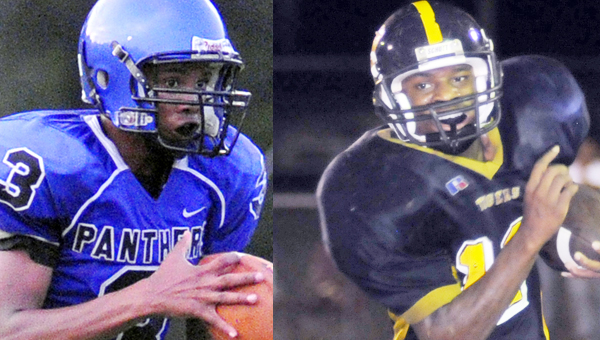 Devin Bonner, left, just a sophomore, is a smart player, but is still learning at quarterback for the Panthers. Right, McKenzie’s Emmanuel “E-Man” Johnson will be the most talented player on the field Friday night.

First-year head coach Shawn Gregory hasn’t found much success in Georgiana in terms of wins or losses. The Panthers enter their annual rivalry contest against McKenzie at 0-5 on the season.

McKenzie, meanwhile, has steamrolled its way to a 5-0 record and No. 6 ranking in Class 1A. They have one of the best players in south Alabama in Emmanuel Johnson, a Southern Mississippi commitment, and Coach Miles Brown is in his fifth season with the Tigers.

Two teams headed in opposite directions, it would seem. Brown’s Tigers are familiar with the coach’s philosophy and offensive schemes. Plus, the team is laden with senior leadership. Gregory’s Panthers are still struggling to adapt to their coach’s spread offensive attack.

However, Gregory still believes in his young Panthers. And while the Georgiana-McKenzie rivalry remains intense among fans of both schools, given the eight-mile separation between the two towns, Gregory is not treating this week’s game as a rivalry.

“They (McKenzie) are just another team on the schedule,” he said.

Gregory even gave his team the ultimate show of confidence.

“This is going to be the team we get our first win on,” he said.

But Brown knows his team will see a different Panthers squad then the one that’s played the last five weeks.

“To me, you have to just throw out the records for rivalry games,” Brown said. “They are going to come down here and play the best football game you have seen them play.”

As Brown put it, with such close proximities between the two schools, you have the potential for cousins playing cousins and friends against friends.

Georgiana at McKenzie: 7 p.m. at Williams-Vickery Field…McKenzie will honor former coach Sam Dour, who led the Tigers to the 1991 state championship, by dedicating the field house in his name…Georgiana leads the all-time series against McKenzie 26-14, but McKenzie has won the last two…the Panthers last beat McKenzie 69-0 in 2005…the two teams did not play in 2006-07…McKenzie won last season 50-26…this is a Class 1A Region 2 game this season…both schools were in separate regions the last two years despite being eight-miles apart…Our pick: Georgiana is talented (running back Keon Binion is an outstanding running back), but lacks depth and sophomore quarterback Devin Bonner is still learning the offense. McKenzie remains loaded at the skill positions and in the trenches. The Tigers will take it. McKenzie 42, Georgiana 21