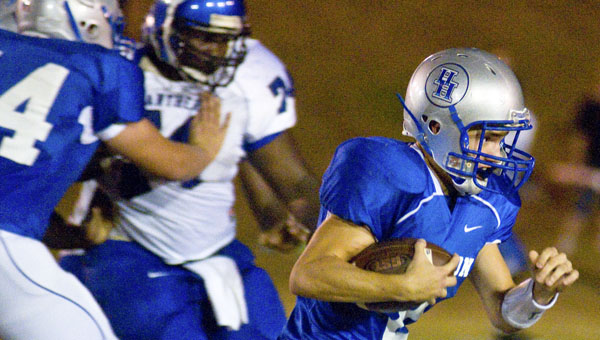 Quarterback Kase Kelly had over 200 yards rushing for the Squadron.

Quarterback Kase Kelly had a career night for the Squadron, racking up 206 yards on the ground with 34 carries.

Overall, the Squadron burned the Panthers for 376 yards of total offense and 20 first downs.

In addition to those gaudy rushing numbers, Kelly was 6-7 passing for 63 yards and two touchdowns with no interceptions.

“We were really able to control the game with our offense,” Pinkston said. “Our defense played better, but we still gave up some big plays.”

Berry also caught a 30-yard touchdown pass from John Dunn after the Squadron reached into the playbook for a reverse pass.

Highland Home went into halftime with a 19-6 lead, and came out in the second half with a 70-yard drive to seize the momentum.

“Georgiana had some big plays to keep it close, but we just kept rolling on offense,” Pinkston said.

The win moves the Squadron to 3-2 on the season.