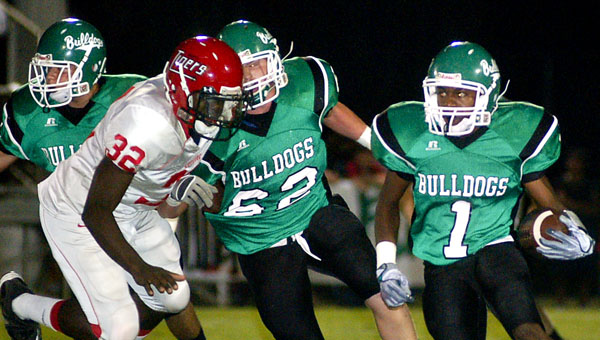 Brantley's Zach Wiley looks to avoid the tackle of Luverne's Desmond Harrell with the help of Taylor Driggers (62) and Steven Walker (55).

After a tight first half, the Brantley Bulldogs came out in the second half, grabbed the momentum and never looked back as they earned a hard-fought 27-7 victory over rival Luverne.

Both teams’ defenses played well in the first half, but Luverne’s offense made several trips deep into Brantley territory.

On the heels of two long runs from quarterback Tige Townsend, the Tigers moved as far as the Brantley 22-yard line before facing fourth down.

On fourth down, Townsend took a shot at the endzone but was intercepted by Chester Person, who returned the ball 85 yards to Luverne’s 15-yard line.

The Bulldogs managed to convert on fourth down and quarterback Zach Johnson scored from three yards out to put Brantley ahead.

For much of the first half, Luverne flipped an old adage by proving that sometimes, a good offense is the best defense.

Although the Tigers’ defense rose to the challenge against Brantley, Luverne managed to possess the ball and win the time of possession battle in the first half.

During a drawn-out drive, Townsend found Jonathan Chambers for a key fourth-down conversion on Brantley’s 25-yard line, and several plays later, Townsend ran right up the middle of the Brantley defense from 19 yards out to put the Tigers ahead 7-6 with 3:35 until halftime.

“We managed to hold the ball a lot in the first half, and that worked well for us,” said Luverne head coach Les Sanders.

Brantley head coach David Lowery credits Luverne with unsettling the Bulldogs in the first half.

“I’ve got to give credit to Luverne because our defense was on the field for most of the first half,” he said. “We just had to settle down and try to get the momentum in the second half.”

The Bulldogs did just that with a little help from Luverne.

After Brantley moved down the field on the opening drive of the third quarter, the drive stalled and Luverne held on fourth down on their own 27-yard line.

However, the Tigers gave it right back with a fumble on the first play of the ensuing drive.

“We stopped them to start with, but then we got the ball back and fumbled,” Sanders said. “Later, we held them again but had a busted coverage on fourth and long.  That gave them the momentum, and we just weren’t able to move the ball well after that.”

That busted coverage came when quarterback Justus Harvey hit Devonte Porter for a 15-yard touchdown pass on fourth down to put the Bulldogs ahead 12-7.

Starting quarterback Zach Johnson came up hobbling late in the first half, and Harvey saw significant playing time in the second half and provided a spark for the Bulldogs.

Five minutes later, Harvey threw a perfect pass to the front pylon that was caught by Person, who managed to get a foot inbounds, and the Bulldogs went up 20-7.

The Bulldogs continued rolling in the fourth quarter, and Porter scored from eight yards out on a toss to the right side to put the final score of the game on the board.

“You’ve got to limit the big plays against a good team like Brantley,” Sanders said. “We didn’t make the big plays when we needed to and they did.”

Lowery said having a second quarterback that was prepared to enter the game helped his team.

“Justus has been practicing hard and he was ready to go,” Lowery said. “He got in and made some plays.  It’s really good to have two guys that can play.  Zach [Johnson] was also able to come back into the game and gut out some big runs for us.”

Many of Johnson’s runs helped the Bulldogs pick up key first downs in the second half.

“We’re all about winning, and when I go in, I give it everything I’ve got,” said Harvey.

Despite the festive atmosphere, the contest ended on a somber note as Luverne running back Ryan Waters suffered a head/neck injury with under a minute to play and was taken off the field by ambulance.

His condition is not known at this time, and more information will be posted as it becomes available.