No. 1 FDA beats up on Knights 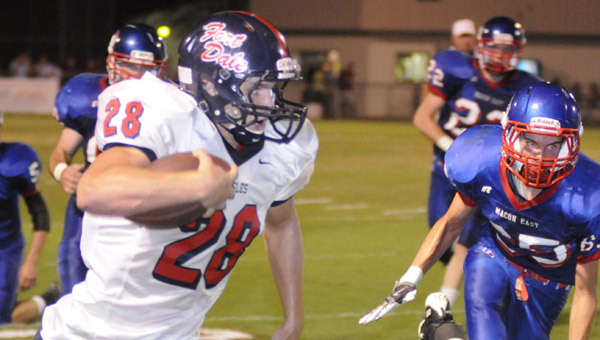 The Fort Dale Eagles didn’t get off to the best start Friday, but with the help of three touchdowns from Manny Norrell, the Eagles routed Macon-East 51-14.

“It turned out to be a little one sided, but it wasn’t one-sided at halftime,” said head coach James “Speed” Sampley.

Norrell picked up his second touchdown of the night on a seven yard rush. Dow Gardner ran in the extra two and FDA led 16-7.

With 4:01 left in the second quarter, Macon East cut the Eagle lead to two, picking up six and the point after.

With 24 seconds left in the first half, Fort Dale drove the ball to the 2 yardline and Norrell muscled it in for the touchdown. The Eagles led at the half 24-14.

Things went downhill for the Knights after the first half. Sawyer Reeves was the man of the hour, with two blocked punts, one of which he ran back for a 30-yard touchdown. Reeves picked up 10 tackles for the night.

Armstrong took it 25 yards  for the touchdown to start off the second half rally that would be the nail in the coffin for Macon-East.  The next drive, Brandon Matthews caught a 12 yard pass, followed by the extra point by Jonathon Scott to bring the score to 37-14. Reeves ran back a 30-yard return off a punt block for the final touchdown of the third quarter. Scott, again, picked up the point after to make the score 14-44.

“We made too many penalties and shot ourselves in the foot with turnovers,” Sampley said. “If we don’t do that, we could be a really good football team. But you can’t do that and beat a really good opponent.”
Fourth quarter saw little action, as most of the starting Eagles had been pulled.

Norrell was the leading rusher for the night, with 19 carries for 123 yards and 3 touchdowns. Armstrong had 13 carries of his own, picking up one touchdown and 73 yards.

Stephen Till led in receiving, with 5 receptions for 65 yards.

Fort Dale will face the team coach Sampley feels is the best team in 3A next week, when they host Monroe Academy. – Austin Nelson