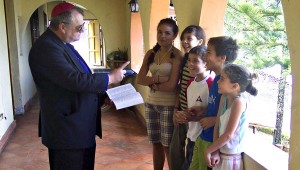 The country of Colombia is known for everything from coffee to illegal drugs, but Archbishop Michael Simmons of the Church of the Alpha and Omega in Luverne recently took a mission trip to minister to the people.

Alpha and Omega is part of the Anglican Church, and a service was held on Tuesday night where Simmons shared stories and pictures from the trip.

“There’s a real hunger for God there,” he said.

The mission lasted from July 30 to August 9, and focused on the areas of Bogota, Medellin and Bucaramanga.

The tone for the mission was set at the first mass of the trip, where more than 150 people were saved.

Because of the dangerous reputation of some parts of the country, the mission team had a police escort much of the time, but Simmons reported that he never felt unsafe.

“For breakfast, we always had lots of fruits like papaya and fresh juice,” he said.

Despite Colombia’s reputation for coffee, Simmons said it isn’t normally served with breakfast.

One cultural difference was highlighted as a result of the zucchetto, or skullcap, worn by Archbishop Simmons.

“The Colombian people have a profound understanding of blessing,” he said. “I couldn’t drink a cup of coffee or walk down the street without being asked to bless someone.”

With the mission to Colombia a success, the next mission trip is set for Peru in October.

The four major goals of that mission are: the consecration of a missionary bishop, the ordination of deacons and priests, the establishment of a missionary diocese for Peru and the registration of the latter with the Peruvian government.

For more information about upcoming mission trips, call the parish office at 335-5707.