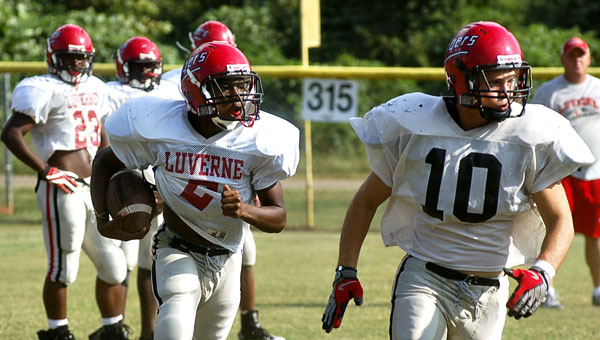 Jonathan Chambers turns the ball upfield behind the block of Ryan Waters.

When a new football schedule comes out, there’s one game a year that is circled for many Crenshaw County residents – the Brantley-Luverne football game.

This year’s renewing of the rivalry is scheduled for this Friday night in Brantley.

Both coaches recognize what this matchup means to fans of both schools.

“It really means a lot to both communities,” said Brantley head coach David Lowery. “It’s like a miniature Auburn-Alabama game.”

“Both of the communities are so close together,” said Luverne head coach Les Sanders. “It really is a special game. It’s good to be part of a rivalry, and it ought to be fun. Fun, but stressful when you’re trying to win.”

The rivalry has been close over the years, but Luverne holds a 39-24 all-time record against Brantley.

However, the Bulldogs have recent history on their side — Brantley has won seven of the last eight meetings between the teams.

Luverne got the better of the Bulldogs last year 22-21 on a two-point conversion with 34 seconds left to play.

That game was in Luverne, and this year’s match will be held in Brantley.

“You’d rather play at home because of the familiarity,” Sanders said. “Brantley plays well everywhere, especially when they’re at home.”

Both teams have battled sickness in recent weeks.

Sander said the Tigers have had a number of players under the weather, but all should be ready for Friday night.

Brantley’s Harley Stringer broke his leg Monday during practice, and Zane Johnson is still recovering from a broken foot suffered against Kinston earlier in the season.

Despite that, Lowery said the team is looking forward to Friday night.

“It’s good for both schools,” he said. “It’s great for the kids and it’s great to coach in. There’s a playoff atmosphere to it. Get there early and bring a friend.”

Kickoff is set for 7 p.m. in Brantley.