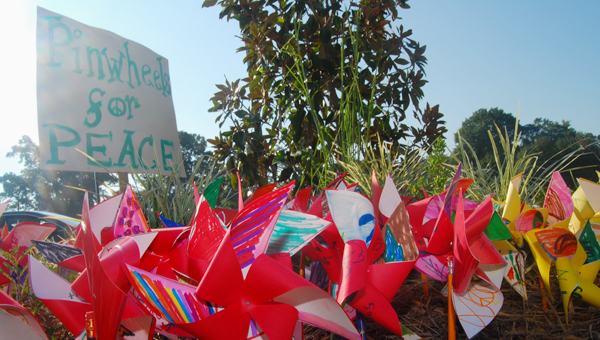 Over 600 pinwheels were on display at W.O. Parmer on Friday.

“We wanted to give these kids a chance to learn about peace and the possibility of a world where people aren’t hurting or harming each other,” Vialet said. “Being tolerant of differences is important to learn.”

Kindergarten, first and second graders visually expressed their feelings of peace on the front of the pinwheels, and used the other side to write down their ideas of war, peace and living in harmony with others. Inside Mrs. Vialet’s classroom, words like calm, serene, tolerant and non-violent were written on the board to help with the discussion.

The demonstration is part of a larger program, Pinwheels for Peace, that was started by two art teachers in 2005. In 2008, the program boasted 2.3 million pinwheels helping to promote their message of peace.

For more information on the international Pinwheels for Peace program,  visit www.pinwheelsforpeace.com/.