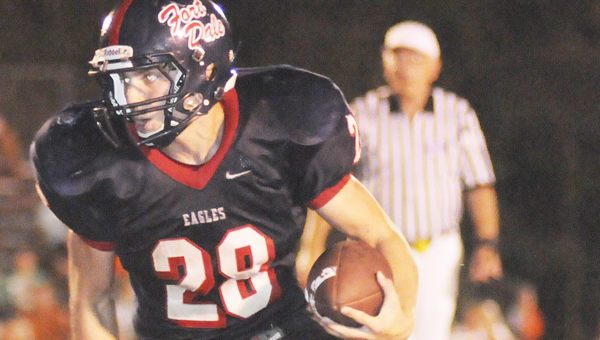 Fort Dale has a chance to settle the score this weekend as they travel to Macon-East, the only team that defeated the Eagles in last year’s regular season.

Coach James “Speed” Sampley said his team turned the ball over four times versus Macon-East last year, which he said was partly responsible for the loss. The key to victory on Friday will be avoiding giving up the ball, which Fort Dale has struggled with lately.

“We have played four games and only punted four times,” Speed said. “Normally, this would be a good thing, unless you are turning over the ball on the regular basis.”

Macon-east runs an option defense, Speed said, which means his players will have to play solid assignment football.

Sampley also sees some room for improvement with special teams.

“We have to do a better job of not letting the other team run kickoffs and punts back to half field,” Sampley said.

The Eagle offense showed a little flair last week, running a triple pass play that picked up over 30-yards. Coach Sampley, however, said plays like this aren’t called often.

Our Pick: Because of quirky AISA scheduling the Eagles are playing in Cecil for the second straight year.