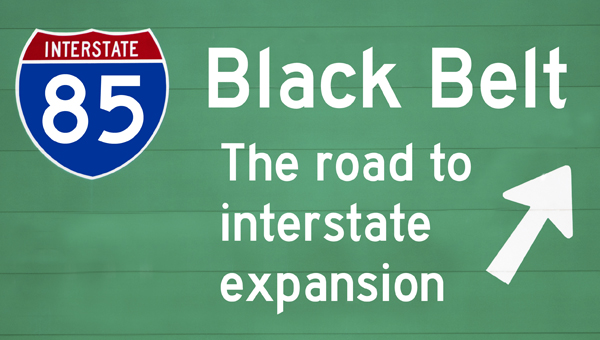 As it stands right now, the extension of I-85 through the Black Belt will span 126.4 total miles and carry with it price tag of $2.369 billion.

The above are the mileage and cost estimates for “alternative 31”, one of 36 routes proposed by Volkert and Associates, who has been hired for consulting on the project. Alternative 31 has been identified as the preferred route after a review of the impact each of the 36 routes would make.

Developers, however, hope this expenditure could breathe life into a region of rural Alabama that has been on the decline, between the short-term construction jobs it would bring and the long-term stability it would work to create.

“The general idea is that when you bring a better roadway to an area, you encourage some businesses to come to the area, if nothing else but the gas and service stations that pop up at interchanges,” said Carolyn Trent, a research analyst at Alabama’s Center for Business and Economic Research, who undertook a socio-economic analysis of the I-85 study area in 2006.

Data from analysts indicates a newly expanded I-85 could become the avenue of economic change for the Black Belt, but building the interstate may only be the first piece of the puzzle.

The most immediate affect of the expansion of I-85 would be the creation of jobs to fuel the construction effort.

The Federal Highway Administration published a report in 2007 titled Employment Impacts of Highway Infrastructure Investment, which lists the amount of jobs created per $1 billion invested. At $2.369 billion, the I-85 project could create 65,911 total jobs. For this estimate, “job” counts person years. For example, 50 person years could be 25 jobs for two years or 50 jobs for one year. This estimate included a standard seven percent allotment for right of way purchase.

When you are talking about potential employment growth, the FHA identifies three different categories of jobs that stand to be created by infrastructure investment: construction-oriented, supporting industry and induced employment.

Construction oriented employment is defined as all jobs that are created by firms that work directly on the project or provide direct inputs such as paving materials. Of the 65,911 jobs, 23,591 would be construction-oriented.

Larry Lee, director of the Center for Rural Alabama, identified some examples of these jobs.

“These would be the asphalt folks and your concrete folks, as well as your dirt-movers,” Lee said.

These positions should not be confused for supporting industry employment, which are jobs at firms providing materials that are used in highway construction.

Growth in this area is expected to create 10,244 jobs.

For example, a company that produces guardrails would qualify as a construction-oriented job, where as the firm that supplies the raw steel for these rails would be a supporting industry job.

Long-term employment, however, could be generated after the dust settles.

“Accessibility to good transportation at work is key to most economic development,” Lee said.

Just-in-time manufacturing, a business model which calls for low inventories and constant deliveries, Lee explained, has put increasing time constraints on businesses, and the easier it is to key manufacturing parts to get to and from plants, the better.

Lee said, however, that more would have to be done to ensure this area prospers in the future.

“One of the biggest handicaps for this area is there isn’t a mass labor force available,” Lee said.

In addition to quantity, quality of the workforce is also important, Lee said.

“Any type of development needs to start with education,” Lee said. “Of the 12 counties in Alabama’s Black Belt, half of their schools are on the persistently low achieving list.”

A good school system, Lee explained, could insure an influx of educated laborers into the workforce that could carry the region into the future.

Analysts have suggested that construction of this roadway could have a lasting effect on the population of the region as more jobs move into the area.

“Population movement is affected by economic circumstances and job creation,” Trent said. “When you look at the idea of the new road coming through, that should create some more prosperity and jobs which could improve the population trend.”

The CBER socioeconomic analysis of the I-85 extension included population projections with and without the new development included.

For all seven counties that stand to be affected, the report said that a total of 8948 more people would reside in the area by 2030 if the road was constructed.

Trent said these counties suffer from a lack of job opportunities, which affects the population from growing.

The area is also plagued by the migration of the 18-24 year olds, Trent said, as many leave to go to school and don’t return.

“If they can create additional jobs with the highway, hopefully the population should not decline,” Trent said.

Marengo and Perry county stand to lose 634 and 496 jobs respectively without the new development. However, this negative trend is predicted to turn into growth should the I-85 extension be constructed. Marengo could gain an additional 1,940 jobs, while Perry could gain another 791.

Still, Trent advised, I-85 is far from a cure-all for the Black Belt’s economic woes.

“An interstate can’t always work miracles,” Trent said. “It takes business development as well as a growing population to have an economic turnaround.”