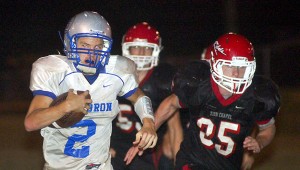 For much of the second half, it seemed that the Highland Home Flying Squadron had the game in hand, but Zion Chapel made a furious run in the last five minutes of the game.

When the dust cleared, Highland Home claimed a 23-22 victory.

“What we preach is that we’ve got to play hard the entire game,” said head coach Tom Pinkston. “We finally played the whole game, and we made big plays when we needed to.”
None of the plays were bigger than the conversion attempt on Zion Chapel’s final touchdown of the night.

After the Rebels scored on a 47-yard touchdown pass with 1:02 left to play, the lead was only one point and Zion Chapel lined up for the two-point try.

The play was a sweep to the right — the same play that the Rebels had used successfully on the two previous two-point tries — only this time, Zion Chapel’s Wesley Black came up short by less than a foot.

That defensive stand marked the end of a strong attempt by Zion Chapel to salvage their homecoming.

Highland Home started the game strong, with Ethan Sexton breaking a 49-yard run to set up a 23-yard field goal from Lewis Johnson on the opening drive.

With under a minute to go in the first quarter, Kase Kelly scored on a 16-yard quarterback draw to put the Squadron up 10-0.

Zion Chapel scored early in the second quarter, and the Rebels threatened again late in the first half, but the Squadron defense stood tall.

Highland Home started the second half much like they started the first half: with a long run from Sexton.

That run set up a 32-yard run by John Dunn around the left end to the endzone on the second play of the half.

Less than a minute and a half later, Sexton intercepted a pass for the Squadron and returned it 30 yards for a touchdown to make the margin 23-8.

Raheem Berry came up with an interception midway through the third quarter, and the defense held tough until the Rebels began their comeback with five minutes to play in the game.

“We needed to taste a win again,” Pinkston said. “If you can pull out wins like that, it builds character.  We’re getting experience in tough situations.”

The win moves the Squadron to 2-2 on the season and 1-2 in the region.