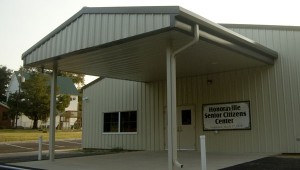 The Honoraville Senior Citizens Center has passed inspection and a grand opening date will soon be set.

After several delays because of construction, the Honoraville Senior Citizens Center is back in the hands of the Crenshaw County Commission.

In July, commissioner Rickie McElwain and administrator David Smyth met with representatives from project contractor Lewis and Associates, the USDA and other companies to discuss what was needed for the project.

A number of construction issues were addressed, and those concerns were recently completed.

“It looks really good,” said McElwain, who said that chairs and tables for the center should be delivered soon.

No grand opening date has been set.

In other business, the commission approved the purchase of one 10-ton air conditioning unit and two five-ton units for the jail at a cost of $12,000.

The budget for the fiscal year 2010-11 was approved, but it won’t be released until Oct. 1, pending possible adjustments before then.

Of 125 total FEMA projects in the county, 108 have been completed and 16 are currently in progress, meaning that 124 of 125 projects have been addressed.

The commission also voted to adopt the unnamed road off New Bethel Road behind Highland Home School that runs along the east side of the football field.

The new road is tentatively named Ballfield Road and will be adopted into the county maintenance program.