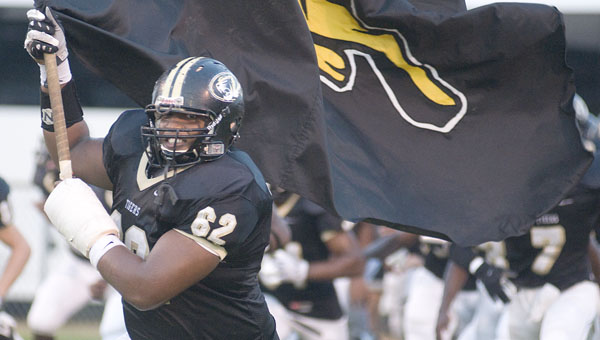 Greenville’s Anthony “Shaq” McMeans leads the Tigers out onto the field against Central-Tuscaloosa. The Tigers return home Friday night to play Chilton County.

Greenville is preparing for a tough match-up Friday when they will kickoff against 2-1 Chilton County.

“They have only loss to Demopolis, last year’s defending state champs,” said head coach Ben Blackmon. “The kids play hard and they are going to lineup right.”

“A lot of our points that we are given up is due to inexperience, maybe lining up the wrong way and just being banged up,” Blackmon said. “When you are starting two tenth graders in a varsity game, that should tell you something. We started a ninth grader on the offensive line.”

Blackmon said he has been battling a few injuries as well. Last week’s game, he said he lost two senior defensive starters.

“They (the younger players) are trying hard, its not an effort issue,” Blackmon said. “We need to get some experience so they can understand the mistakes they are making and be able to fix them.”

Coach said he will look to players like Kent Riley, Jamall Hamilton and Darius Watson to keep making big plays this Friday.

Riley scored four touchdowns on the ground for Greenville last week. Hamilton had a 76-yard sprint for a score as well.

“We have to be mentally prepared for this game,” Blackmon said.