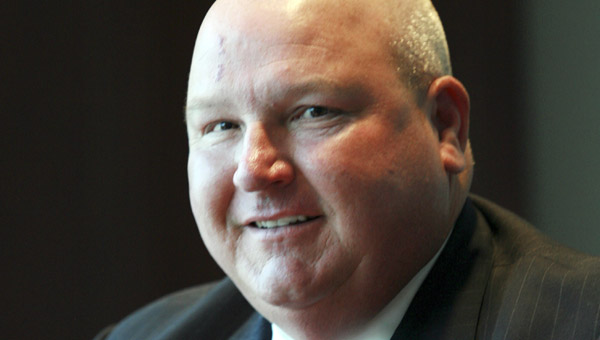 Ralph Stacy served as Executive Director of the Greenville Area Chamber of Commerce for six years. He died Tuesday, Sept. 14, 2010. (Photo courtesy of the Business Council of Alabama)

“Ralph’s contribution to the BCA, The Partnership, and their respective memberships went far beyond his daily professional work there”, said BCA Chairman Sandy Stimpson. ”He was our spiritual and temporal cheerleader, a constant, enthusiastic presence who urged us to do and believe the best of ourselves and our efforts. He will be missed.”

“We are profoundly saddened by Ralph’s death,” said BCA President William Canary. “He was an important part of our senior leadership team, and everyone in the BCA, both staff and membership, as well as his extended network of personal and professional friends in The Partnership, will miss him. Our prayers are with Ralph’s family as they suffer this loss.”

The BCA release did not provide details of Stacy’s death. Montgomery police spokesperson Major Huey Thornton said police responded this morning to the scene of a suicide by gunshot at 2 North Jackson Street, where Business Council of Alabama offices are located. Thornton said he could not confirm the identity or gender of the victim.

Stacy had served as the senior vice-president for strategic communications for the BCA since January 2010. He had also served as executive director of The Partnership, an organization that links more than 120 local Chambers of Commerce statewide and their nearly 50,000 business members with BCA. The founding president and CEO of the Chamber of Commerce Association of Alabama, Stacy held the Certified Association Executive professional certification as issued by the American Society of Association Executives.

Stacy was a graduate of Huntingdon College, a graduate of Class Sixteen of Leadership Alabama, and recently received “America’s Champion of Small Business Award” from the National Coalition of Capital, as well as the Chamber of Commerce Association of Alabama’s Jamie Wallace Award for lifetime achievement in 2009.

Stacy, a native of Georgiana, was a well-known figure in Alabama through his work with the state’s 120 Chambers of Commerce. He was a popular emcee and guest speaker in Greenville and the surrounding area for events such as the annual Relay for Life and the Achiever Award program. His columns were published in The Greenville Advocate, where he worked as a reporter prior to serving as executive director of the Greenville Chamber.

He is survived by his wife, Angel Stacy, and his daughter, Savannah, both of Montgomery. Funeral arrangements will be announced at a later date.

The Advocate will update this story as more news develops.