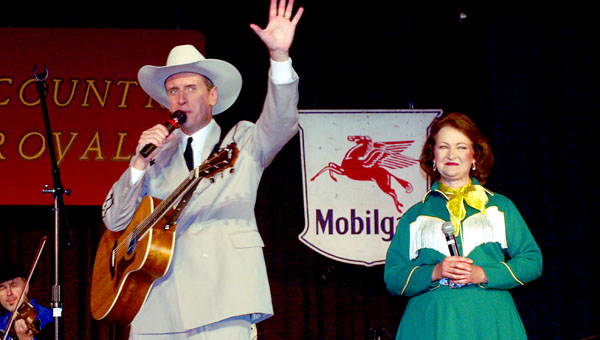 A large and enthusiastic crowd went “Crazy” with the “Lovesick Blues” Monday night at the historic Ritz Theatre as two of country music’s greatest legends came together on stage to perform a string of unforgettable hits.

While the ghosts of Hank Williams Sr. and Patsy Cline may not have actually crooned into the microphones on stage, Jason Petty and Carolyn Martin, ably backed by the Country Royalty Band, did an amazing job bringing the music made famous by these luminaries to life once more. Petty, an Obie Award winner for outstanding Off-Broadway actor, shared folksy anecdotes about Hank’s early life in Butler County, his rise to stardom and his tragic early death. Like Hank, Patsy suffered some tragedies and died much too soon, yet also left behind an incredible musical legacy.

“When I worked at Opryland, every girl auditioning wanted to sing a Patsy song-every girl,” Petty said.

The audience joined in on up-tempo numbers like Hank’s most notable gospel tune, “I Saw the Light,” while some eyes grew misty as Cline’s emotion-felt songs rang through the auditorium.

“I really enjoyed that. It was music I remember so well and it made me very nostalgic,” said audience member Frances Benson.

The Ritz performance, the first of the 2010-2011 GAAC season, was also the debut of “Country Royalty.”

Martin and Petty were able to mix and mingle with GAAC members and pose for photographs during the after-party held at Polka-Dots Café downtown.