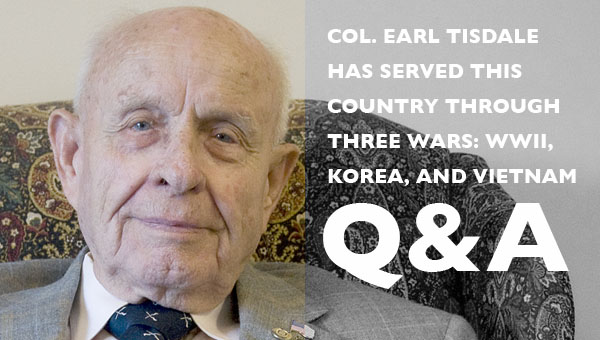 Col. Earl Tisdale makes his home in Greenville with his wife Linda Vandenbosch.

Colonel Earl Tisdale (USA, ret.) has served this country through three wars-World War II, Korea and three tours of Vietnam-and lived, worked and visited an amazing number of places, from Iran to Hawaii. Married since 1991 to Linda Vandenbosch, retired city clerk for the City of Greenville, the colonel, a still-active Rotarian, will celebrate his 90th birthday this December 8.

You moved to Greenville in the early ‘90s, but you actually already had a close connection to Butler County, correct? Yes, my father was born in the Garland community in 1895.  His family later moved to Gulf Springs, Fla., where I was born. I’ve got a Greenville Advocate newspaper cutting of the ad for my grandfather’s farm being for sale. And I had an aunt who lived here right out of college; she was what they used to call a home demonstration agent. When I moved here, in a way I already felt at home.

What was it like growing up in rural Florida in the 1920s and ‘30s? By today’s standards we were poor-but we really didn’t know it.  I didn’t realize that until I asked Daddy one day for a nickel to buy a Coca-Cola and he told me he didn’t have any money at all.
Still, we had a good life in the country.
I walked to the grammar school; during high school I rode the bus to Century.
I envied those high school students who got to walk home for lunch. (Laughs) Turns out they envied us for getting to ride the school bus!
We played a lot of games during recess and lunch hour: marbles, Blind Man’s Bluff, Big Guinea, Little Guinea, Red Rover . . . do kids even play some of those anymore?
We also played baseball. We’d take a hard rubber ball, wrap it in twine until it got baseball-sized and sew it to keep it from getting unraveled and we whittled our own homemade bats, too. We liked cowboys and Indians and cops and robbers. We’d whittle wood into the shape of a gun and add a clothespin and rubber band-it could sting you!
I also loved to read adventure stories whenever I got the chance.

But you also had chores around the farm, right? Oh, yes, I remember helping harvest crops-watermelons, cotton, corn, Irish potatoes.
I milked cows, fed the livestock and swept the yard-no grass, just dirt-and we’d bundle twigs together and make brooms.
I was the oldest, and one day my father said, “You’re old enough to start making the fire first thing in the morning.” That meant I had to get up before everyone else did in the cold weather. I was sorry I got to be that age for a while. On weekends, well, we did the same sorts of things we did during the week, including chores—just no school. We’d go to Sunday School every Sunday morning and services once a month.

You grew up to have a long, distinguished military career. Tell me more. I first put on a military uniform in 1938 at Georgia Tech where I was studying Cooperative Education. ROTC was mandatory there for one year. I went to school for three months and worked for three months making $16 a week. I wasn’t making enough to cover my college expenses, so when they offered me a full-time job, I took it.
I joined the 30th Infantry of the National Guard. On September 16, 1940, the president declared a state of emergency due to the war in Europe, and we were one of the first units mobilized. And the law was passed to institute the draft that same day . . . I was later chosen for Officers’ Training School and became a second lieutenant on May 5, 1942. I retired in 1970. (Pauses in thought) I still miss it. I still attend functions at Fort Rucker and Fort Benning, including Retiree Appreciation Day.

Where are some of the places you lived and visited? I’ve been to all 50 states, most of the Canadian provinces, several states in Mexico and between 20 and 30 foreign countries.

Any place you haven’t been and want to visit? China-I want to see the Great Wall. And Russia.

Favorite place you lived? Well, I really liked them all, even Tehran. But Hawaii, now that was a delightful place.

You moved into the realm of city government in Auburn when you retired for the Army. What was that transition like? It really was a good fit for me. As a colonel, I was in charge of managing people, machinery and money. And that is exactly what I did as a manager of the City of Auburn. Actually, I served in several capacities, including as police chief for six months. I still have the certificate qualifying me to serve as a peace officer, but thank goodness I haven’t been called upon to do that (laughs). After my second retirement, I did some consulting for several years.

You suffered two great losses very close to each other while you were in Auburn, didn’t you? Yes. Our only son, Ty, collapsed and died at 45. Three months later, my first wife Kathryn died of cancer. (Pauses) I’m just now getting to where I can talk about it. But it certainly had a greater impact on my grandson than anyone else.

How did you and your current wife Linda meet? We first met at conferences when she was Greenville city clerk and I was the clerk in Auburn . . . two years after Kathryn passed away we married, and that’s when I sold my house and moved to Greenville. I’ve been very, very fortunate in finding Linda.

What is the best advice you’ve ever gotten? Always tell the truth, keep your word and do a good job. I think that about covers it.  And-always try to find some humor in life, no matter what.

Ghosts of the Past: Country Royalty

Hank (Jason Petty) and Patsy (Carolyn Martin) will walk the stage of the Ritz Theatre on Monday night. Concert starts at 7... read more