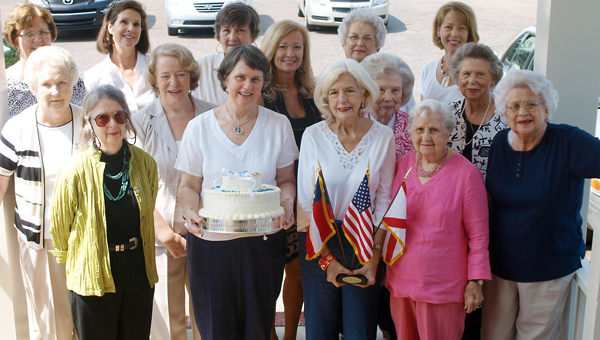 Members of the Father Ryan Chapter, United Daughters of the Confederacy, #338, gathered on Thursday, August 26, 2010. Members planed programs for the upcoming year and reviewed materials to be included in the chapter’s handbook.

Each August, the Chapter celebrates the birth and memory of Father Abram Joseph Ryan, known as the “Poet of the Confederacy”. Father Ryan was a priest of the Roman Catholic Church and joined the Confederate Army as a chaplain in 1862. In 1870, Ryan was appointed pastor of St. Mary’s Church in Mobile where he served until 1883.  He died in 1886 and is buried in Mobile.
The Father Ryan Chapter remains active with projects including preserving Pioneer Cemetery, raising funds for the Jennie Vieve Crenshaw Poole UDC Scholarship, and participating in local and statewide historical programs.

The Chapter celebrates the births of Generals Robert E. Lee and Stonewall Jackson in January and pays homage to fallen soldiers each April on Confederate Memorial Day.
A cake (made by Mary Lou Crenshaw) with the design of the UDC and in memory of Father Ryan was served following lunch.