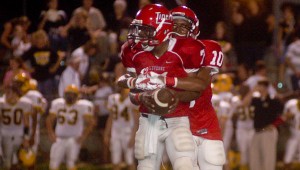 On the opening drive of the game, the Bobcats marched down the field and capped the drive with a 25-yard scramble by quarterback Tyler Harrison.

However, Luverne came back to tie the game at seven with seconds left in the first quarter on a six-yard run by quarterback Tige Townsend.

In the second quarter, Luverne broke the tie when Townsend broke away on a 70-yard run to make the score 13-7.

From there, the game was an old-fashioned, smash-mouth defensive battle.

Opp mounted drives into Luverne territory several times in the second half, but each time the Tiger defense stood tall.

Luverne faced a number of fourth downs late in the game, but conversions on fourth-and-short with 3:05 and less than 30 seconds to play sealed the game.

“I was worried about our numbers and their depth taking over late in the game,” Sanders said. “Our kids fought last week, and we had some young players that found out how to win.  We just made plays that we didn’t make in the weeks before.”

One of the key players for Luverne was Townsend, who scored both touchdowns.

Townsend said he was able to read the defense well and also that he wasn’t concerned about Opp’s numbers.

“When I lined up, I could tell where the holes were going to be,” he said. “They had a lot of people, but only 11 play the game.”

The win moves Luverne to 2-1 overall on the season and 1-1 in area play.