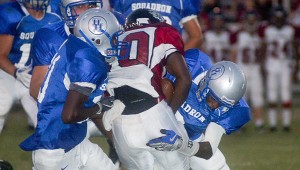 Arlandis Johnson and Jason Sankey converge to tackle a New Brockton running back.

By Michael Rodgers
The Luverne Journal

After a slow first half, the Highland Home Flying Squadron came back in the second half but couldn’t overcome New Brockton, who won 28-21.

The Gamecocks jumped out to an early 6-0 lead and added another touchdown midway through the second quarter.

The Squadron defense came up big late in the first quarter by stopping New Brockton on fourth down inside the five-yard line.

Highland Home mounted a drive with under a minute left to play in the half after big runs from Kase Kelly, Ethan Sexton and John Dunn.

A Hail Mary to the endzone with three seconds to play fell incomplete and the Squadron were down 12-0 at halftime.

In the second half, Highland Home came out and the offense started clicking.

“We were able to run on them some, and then we were able to throw it,” said head coach Tom Pinkston. “We started moving down the field.  We got in a rhythm offensively, but we just couldn’t stop them on defense.”

The Squadron got two touchdown runs in the second half from Sexton and punt return touchdown from Dunn, but they just couldn’t pull even with the Gamecocks.

“We played hard the whole game, and we did well down the stretch, but we just don’t have much depth,” Pinkston said. “I was proud of the effort, and we’ve still got a bunch of kids learning how to win.”