Ghosts of the Past: Country Royalty 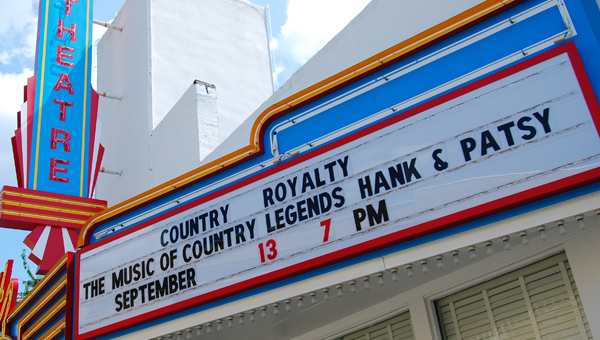 Hank (Jason Petty) and Patsy (Carolyn Martin) will walk the stage of the Ritz Theatre on Monday night. Concert starts at 7 p.m.

Jason Petty, the talented musician who brought his show “Hank Williams: Lost Highway” to Greenville before it made it to New York for a critically-acclaimed and award-winning run off-Broadway, is coming back to town Monday night.

And this time, he’s bringing Patsy with him.

Petty and award-winning songstress Carolyn Martin will perform the greatest hits of these two country music luminaries and share their stories in the debut performance of Petty’s newest show, “Country Royalty: Jason Petty and Carolyn Martin’s Tribute to Hank Williams and Patsy Cline.”

With Butler County as the birthplace of Williams and Greenville as the place where he learned to play the guitar and sing the blues courtesy of Rufus “Tee-Tot” Payne, the Camellia City seems to be the perfect place to unveil Petty’s newest show.

“Jason has been with us twice before with ‘Lost Highway’ and ‘Hank and My Honky Tonk Heroes’ and he is a phenomenal performer. We are certainly looking forward to seeing him again and this time, we get twice the country legends,” said Nancy Idland, executive director of the Greenville Area Arts Council. “Country Royalty” is also the debut production of the GAAC’s 2010-2011 season.

The curtain rises on the production at 7 p.m. Monday, September 13 at the historic Ritz Theatre. Tickets are $20 for adults and $15 for students and are available at Grayson’s of Greenville and The Pineapple.