Another win under the belt for Fort Dale 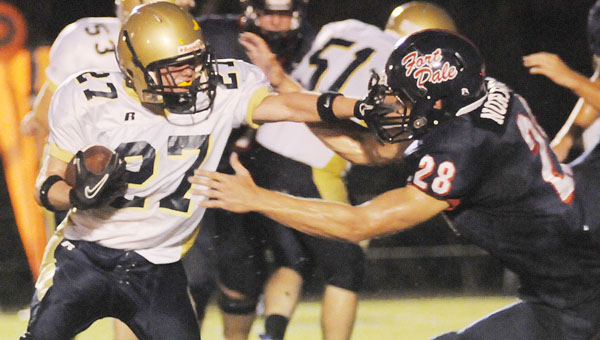 Things didn’t get much worse for the Rangers, but the outcome had been determined: 41-13.

“We needed to get that over with,” said Sampley. “That wasn’t really a fair fight and I think they knew that, and we knew that.”

Sampley said Lyman Ward’s circumstances put them at a disadvantage every season.

“They have the numbers to be 3A, but they never know what kids they are going to have,” Sampley said. “We get to lift weights for 12 months, and they lift for two weeks. They are fighting an uphill battle the whole season.”

All of the Eagles’ offense came in the first two quarters.

Armstrong connected to Dylan Thomas for a 15-yard touchdown to get things started.

The Eagle defense forced a punt on Lyman Ward’s first drive, giving Fort Dale the ball on the 29-yard line. Perry Singleton ran in a seven-yard touchdown to bring the score to 14-0.

Again, the Eagle defense came out strong, forcing a fumble that put them in prime position on the 37-yard line. Armstrong found Stephen Till for 12 yards, and then picked up another three yards on a quarterback keeper for the third touchdown of the game, 21-0.

Lyman Ward struck back at the beginning of the second quarter, after a 51-yard pass put them within striking distance. Fort Dale got called for pass interference, bringing the Rangers close enough for quarterback Ronnell Simmons to run in a two-yard touchdown, putting Lyman Ward on the board, 21-7.

The Eagles answered quickly with seven more points of their own with a 10-yard pass to Dow Gardner.

Luck, however, was not with the Rangers. A high snap led to a fumble, giving Fort Dale the ball on the five-yard line. Sawyer Reeves pushed it in to bring the tally to 35-7.

Before halftime, Armstrong managed to add some more passing yards to his record, connecting on a 41-yard pass to Manny Norell for the final touchdown. The point-after was no good.

“We still got some things to iron out,” Sampley said. “Overall, it was a region game and a region win, and that’s what we were looking for.”

Lyman Ward had an equally unproductive second half, though Simmons managed to run in another touchdown to bring the final score to 41-13, with the Eagles blocking the point after.

Armstrong passed 11-for-12 for 178 yards. Till led the Eagles in receiving with three receptions for 46 yards.

On defense, Zane Speir led the pack with six tackles and one fumble. Stephen Till recovered one fumble, with Ryan Salter and Manny Norrell each picking up one interception each.