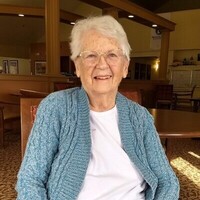 Anita Anne Watts Roberts, 93, died peacefully Sept. 8, 2022, at the Azalea Gardens Assisted Living facility in Tallahassee, Florida. Her son Millard David Roberts and his wife Kristin (Schreiber) were at her bedside when she passed. Anita’s daughter, Anne Chancellor Gibson, and oldest son, Timothy Mason Roberts and his wife Emily (Sellers) had visited and comforted her recently.

Anita’s children called her simply “Mother,” but she also went by several names, depending on which sibling, grandchild, niece, nephew, or friend was addressing her: Mamaw, Gega, Nita, “Ole Witch,” Mamacita, Nita Bug and Nita Poo. She answered playfully to all. She loved to flirt and play games and was always willing to join an adventure. She loved nothing more than crawling into bed with the latest Reader’s Digest and then waking to a breakfast of black coffee and day-old toasted cornbread (with honey).

Anita was born May 22, 1929, in Greenville, Alabama, the daughter of Mary Beatrice Chancellor Watts and Charles Timothy Watts. She was the youngest of seven children. After attending Greenville High School, where she was a cheerleader, she earned a bachelor’s degree from Mars Hill College in Mars Hill, North Carolina, then received a master’s degree in social work from Huntingdon College in Montgomery, Alabama.

In 1959, while attending New Orleans Baptist Theological Seminary, Anita met Millard Mason Roberts, whom she wed a year later. The couple lived in various southern locales as Millard pursued his medical career – Gainesville, Melbourne, Miami, New Orleans, Lafayette, Birmingham, Dothan, and, finally, Tallahassee. There she managed Millard’s gastroenterology practice, dabbling in nursing, bookkeeping, and counseling. When she was unable to make it to the bank to deposit patients’ payments, Anita stored the money in the office refrigerator, calling it “cold hard cash.”

In addition to raising three children and managing Millard’s medical practice, Anita was a dedicated Sunday School teacher at First Baptist Church in Tallahassee. Spanning thirty years, Anita’s lessons combined a scholarly approach gained during her time at seminary with a personal vulnerability that endeared her to several generations of women.

Besides their weekly fall pilgrimages to Gainesville to see Florida Gator football games, Millard and Anita ventured well beyond the South. Her stories of their escapades in Costa Rica, West and East Germany, France, Italy, the Netherlands, Belgium, Venezuela, Kenya and Turkey were minor scandals for her Alabama in-laws and her children.

In lieu of flowers, the family asks that Anita’s friends and family make contributions to First Baptist Church, Tallahassee.