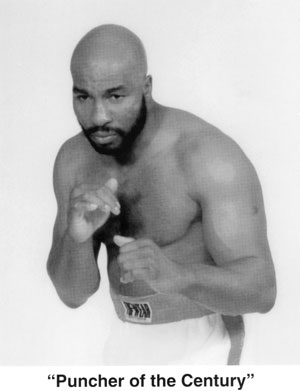 Earnie Shavers was born on August 31, 1944 in Garland Alabama to Curtis and Willie Belle Shaver. Shavers would go on to become known as one of the hardest punchers in boxing history.

Shavers said everything just came naturally to him when he began boxing at the gym. He attended training camps for boxing and before long, was fighting in commercial matches.

In the United States National Championships held in April of 1969 in San Diego, California, Shavers entered the ring four times, to finally take Charles Elder out with a TKO in two minutes and 15 seconds.

By the time Shavers turned pro, he had won 44 of 47 fights by knockout. 20 in the first round.

When Shavers hired Don King to be his manager, his career took off. King was able to step up the class of the boxer’s opponents.

On June 18, 1973, Shavers had a first-round knockout with the one-time WBA heavyweight champion, Jimmy Ellis, at Madison Square Garden in New York City, garnering him the public’s attention.

The toughest match of his career, Shavers said, was the brutal match between him and Roy Williams. After nearly being knocked out, he managed to beat Williams.

On September 29, 1977, Shavers met Muhammad Ali at Madison Square Garden. NBC televised the match where Ali called Shavers “The Acorn” because of his shaved head.

In the second round, Shavers hurt Ali with an overhand right; but Ali made a comeback and won round five.

The crowd was worried for Shavers. He had to outlast Ali. Shavers pounded Ali in the 14th and 15th rounds. Sports Illustrated reported that “Ali was on wobbly legs.”

Ali recovered his strength, and beat down Shavers in the last 20 seconds of the final round. Ali won that match, but he did not break Shavers.

At this point, Ali’s doctor urged him to retire. The “Greatest” went on record to say that “Earnie hit me so hard, it shook my kinfolk back in Africa.”

The best win of Shavers career came in 1979 when he knocked out the former heavyweight champion, Ken Norton, in the first round of their fight.

At Caesars Palace in Paradise, Nevada, Shavers came up against the world heavyweight champion, Larry Holmes. The title match was held on September 29, 1979.

In round seven, Shavers knocked Holmes down to the mat. But the referee stopped the fight in round eleven. Holmes was declared the winner.

In early 1980, Shavers underwent eye surgery for a detached retina. It was a similar injury to the one that Sugar Ray Leonard received.

Shavers continued to fight professionally for several years, but finally retired in 1995. He finished his career with a record 74 wins, 68 of those by knockout.

After retiring from boxing, Shavers became an ordained Christian minister and moved to Phoenix, Arizona.

In the early 2000’s, he went to Liverpool, England to pastor a church.

In 2001, Shavers released his autobiography, ‘Welcome to the Big Time’. It is still available on www.amazon.com and www.ebay.com.