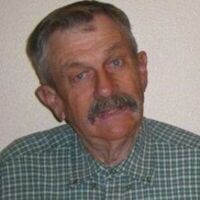 Chris was born in Greenville, Alabama and had been a resident of Palatka for the past 60 years, coming from Greenville. He had worked for Don Hersey at the Viking Barber Shop for many years where Chris shined shoes and kept things clean. He will be remembered by many for the notepad he carried in his shirt pocket, along with numerous pens. He later worked for the Putnam County School District as a custodian, retiring in 2008 after 33 years of service. Chris enjoyed listening to country music and watching Westerns on television.
Preceding him in death were his parents, John and Everett Rogers; and a brother and sister-in-law, John and Anne Rogers.
Surviving are two brothers and sisters-in-law, Jim and Heidi Rogers of Prattville, AL and Cato and Ginger Rogers of Fernandina Beach, FL; two sisters and brothers-in-law, Mary and Charlie Jones of Greenville, AL and Kathy and Ted Redding of Jacksonville, FL and numerous nieces and nephews.
The family would like to express their deep appreciation to the many caregivers who lovingly cared for Chris at Kiva Assisted Living where he was a resident for the past twenty-one years.