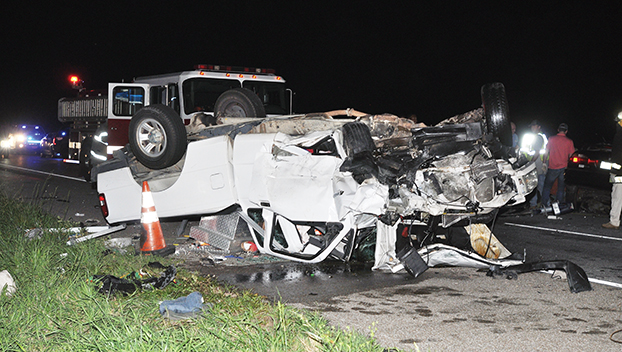 Alabama Law Enforcement Agency troopers are investigating the cause of a crash on I-65 near Fort Deposit Sunday night. | Photo by Mark Rogers

A pair of major motor vehicle accidents that occurred at around the same time Easter Sunday in Lowndes and Montgomery counties left a former NFL player dead and several others injured.

Shortly after 8 p.m. Sunday, Alabama Law Enforcement Agency State Troopers were dispatched to an accident near Exit 142 of Interstate 65 in Lowndes County for a report of an injury accident. Officers from the Fort Deposit Police Department, Lowndes County Sheriff’s Office deputies and CARE Ambulance crews initially responded and found both southbound lanes just north of the Fort Deposit exit blocked.

Shortly after officials arrived, they asked for assistance from Butler County and the Greenville Fire Department responded with the Jaws of Life tool to help extricate one of the drivers involved. The Fort Deposit Volunteer Fire Department also called GEMS Ambulance Service to the scene.

Several people were injured in the accident and were taken to Montgomery area hospitals. Witnesses said the accident appeared to be caused by a driver heading northbound in the southbound lanes. The ALEA report was not complete and not available as of deadline, however, no fatalities were reported in the accident.

The southbound lanes of I-65 near Fort Deposit were blocked for more than an hour as first responders worked to clear the scene.

Meanwhile, in Montgomery County, ALEA State Troopers were dispatched to a single-vehicle crash around 8:50 p.m. on Pike Road near Antioch Lane. Troopers report that Tarvaris Dandre Jackson, 36, of Pike Road, was killed when the 2012 Chevrolet Camaro he was driving left the roadway, struck a tree and overturned. Jackson was transported to a local hospital where he was pronounced dead. The crash occurred about seven miles south of Montgomery.

Jackson was a former Alabama State University football player who went on to the NFL and was a quarterback with the Seattle Seahawks. He was part of the 2014 Super Bowl championship team.

Jackson also coached at Alabama State before becoming the quarterbacks coach at Tennessee State in 2019. He was a Montgomery native and was married and had three children.

Nothing further is available and ALEA Troopers continue to investigate both accidents.