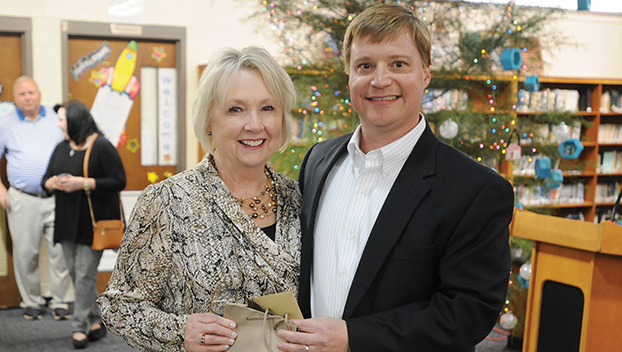 Fort Dale Academy Board President Howard Meadows presents retiring bookkeeper Joyce Murphy with a gift during a reception held last week in her honor. She will retire at the end of the semester. | Photo by Mark Rogers

When Fort Dale Academy closes for Christmas break, one of its most familiar faces will also be saying farewell to the campus where she has worked for 30 years.

Joyce Murphy, who occupied the bookkeeper’s office for nearly three decades, thought she was going to leave quietly.

“I figured with the craziness of December and me retiring at Christmas break, I would surely miss out on a party,” she said with a laugh. “Well, they gave me a party anyway.”

The school held a reception on Nov. 21 to provide an early retirement celebration for Murphy, who actually started out in a very different position at FDA.

“What most people don’t know is I was a first grade teacher’s aide for eight months when I first came to FDA, before moving to the front office. That has to be the most fun I have had since I came there — there is just nothing like first graders,” she explained.

And watching those children grow up and graduate and go on to have families of their own attend Fort Dale has been a blessing, she says.

“It’s so uncanny at times . . . the resemblance you see in the facial expressions and features from generation to generation. You can just look at some children and know exactly who they belong to,” Murphy, whose daughter Kellie is an FDA graduate, explained.

Working at Fort Dale has brought “something new every day,” along with the valuable opportunity to spend time with the community’s children.

Murphy says she was pleasantly surprised at just how much gratification she has gained from working with numbers.

“I don’t have an accounting degree, but I can tell you there was genuine satisfaction derived from keeping the books and making sure everything ran smoothly in that respect for the school,” she explained.

Still, Murphy says, the best part of it all has been the students.

“If you are working at any school, your first love and first priority has got to be the children. And they have brought me the most joy,” she said.

Murphy says working at FDA has brought her a whole village of friends she would never have known otherwise.

“Having grown up in Montgomery, this job has helped me learn so much more about the community, and for my husband Phillip and I to make so many more friends, than would ever have happened otherwise,” she explained.

“You don’t just get to know the children and their parents, but their grandparents, aunts and uncles — their extended families.”

As for her plans for retirement, first and foremost Murphy plans to spend time with her family.

“My daughter and son-in-law and their children Elizabeth, 10, and Thomas, 7, are just 45 minutes away in Montgomery . . . but there are still things I have missed like basketball games due to my work schedule. And I don’t want to miss those things,” Murphy explained.

Time spent playing with her beloved canines and catching up on that stack of books she’s been wanting to read are also in the cards.

“Mostly, I just want to be with family and friends — and to relax.”

She knows she is leaving her daughter’s alma mater and her own “home away from home” for three decades in good hands.

“The teachers and administrators are great and they keep things flowing along. I know I am going to miss it. I truly feel it is time to go–but at the same time, I can’t quite imagine not being there. It will definitely be an adjustment. It was, and is, a special place,” Murphy concluded.

Eiland to take helm of BCSS