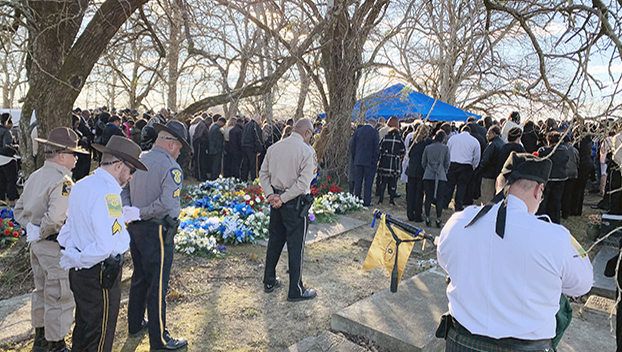 Beginning the night after his death, residents mourned their beloved peace officer, who had served the county for four decades.

Prayer vigils began the week last week with one being held on the Hayneville Square on Nov. 24, and another held on Nov. 25, at Hayneville Middle School. Last Friday, children from around Lowndes County launched blue balloons skyward in front of the Lowndes County Courthouse.

Sunday, more than 2,500 people filed past Williams’ open casket at Hayneville Middle School during a visitation and brief church service to honor the slain lawman.

Williams, 62, was gunned down outside the QV gas station in Downtown Hayneville on the evening of
Nov. 23. William Chase Johnson, 18, of Montgomery, remains jailed in Elmore County on murder charges and investigators continue to piece together the details surrounding Williams’ death.

All afternoon Sunday community members filed by the casket to pay respects and view Williams, who was clad in a white, dress uniform. An honor guard made up of mostly Lowndes County Sheriff’s Office deputies stood by and escorted the body to a waiting hearse from Bell Funeral Home following the services.

The service Sunday night included music and prayers from deacons at Shiloh Primitive Baptist Church where Williams was a member. Deacons thanked the family for allowing them to pay tribute to their friend, sheriff and fellow deacon.

On Monday, a procession left the Bell Funeral Home in Hayneville to bring the sheriff to the Garrett Coliseum in Montgomery, where funeral services took place.

Mourners from around the state and country came to pay tribute to the man they knew as simply “Big John.”

“I’ve known him since the mid-80s-late 80s,” Greenville Mayor Dexter McLendon said as he entered the Garrett Coliseum. “I’ve been friends with him ever since. He was a great guy to talk to. He always came up and spoke no matter where we were. We’d be in some meetings in Montgomery and he’d see you and come up and make sure to see you. There were several meetings I was in that he brought a calming effect to the situation at the time that really nobody else could do by just walking in. He was a true law enforcement guy. He loved what he did. He was a  Marine — that tells you all you need to know about him. He was a great guy, a great family man and I was glad to call him my friend. He was really a good person.”

McLendon said a large contingent from Greenville came to pay respects to Williams.

“We have people from 911, from the Greenville Police Department and the Butler County Sheriff’s Office — I know he and (Sheriff) Danny (Bond) were good friends. He was good friends with everybody. You met him and became his friend. It’s such a terrible thing that’s happened for both families.”

Lowndes County Superintendent of Schools Jason Burroughs said he was saddened by the loss of his friend.

“It’s a loss for the Lowndes County Schools and for me personally,” Burroughs said. “Over the years, I can recall a time when I was principal at Fort Deposit and I had a traffic issue with buses on the street and construction. We couldn’t get some people to stop passing the buses and I called ‘Big John’ down and within one day, he had the situation rectified. We could always count on him.”

Burroughs said he had spoken to Williams the day before he was killed.

“On Friday, he was at my office,” Burroughs said. “He came by to make sure we had secured one of our campuses before we left. I had a chain and a lock and he took it from me and told me to go home for the day — that he would take care of that. That was the kind of man he was. He was not a selfish guy at all.  I also taught his daughter and tutored his son when I was a first-year teacher. I’ve known him a long time.”

“My message to the family is to remind them that their fallen officer was a hero,” Taylor said. “As much as we know that as a community and the State of Alabama we feel that loss, I know that ‘Big John’ died loving the community. For the family, it will be a process for them. Today will be overwhelming. There is law enforcement not only from Alabama, but from New York and Chicago and other states to honor and that shows what special men and women work in law enforcement.”