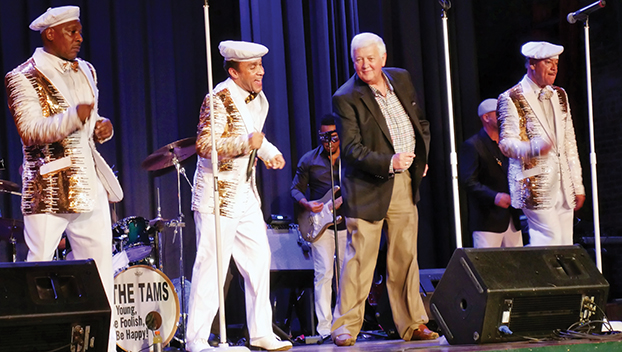 Greenville businessman Al Brannon becomes an honorary member of the Tams as he dances onstage with them last Thursday night. | Photo by Angie Long

The crowd at the Ritz last Thursday night discovered just how much fun it was to “be young, be foolish, but be happy” as they celebrated the arrival of the legendary Tams and the 14 Karat Gold Band. The concert was the latest production from the Greenville Area Arts Council.

Before the event, GAAC members gathered in the Reception Room of the Ritz Complex to enjoy a pre-show party with the usual lavish array of sweet and savory edibles and libations, complete with rustic fall-themed decorations in warm tones to set the proper mood.

The 14 Karat Gold Band from Atlanta, Ga. opened the latest GAAC offering with a variety of classic R&B, soul and pop tunes that had their audience clapping and singing along.

The group known as the Mighty, Mighty Tams later took the stage, resplendent in matching white and gold sequined suits and their trademark tam-o’-shanters, displaying an infectious energy and sweet harmonies as they performed the kind of upbeat music that earned them the title “Beach Band of the Decade.”

The Tams took their peppy vocals and intrepid dancing feet down into the audience on more than one occasion during the show, getting audience members to show off their dance moves up front and on stage, sharing high-fives as the performers moved and grooved up and down the Ritz aisles.

Local businessman  Al Brannon drew cheers and whistles when he danced on stage with the Tams, while retired educator and dance instructor Susan Andrews had a blast when she tripped the light fantastic alongside “Lil Redd” Pope.

The evening brought back many fond memories for Andrews.

“I remember concerts when I was in college. We loved this kind of music. We could dance all night,” she said with a broad smile after the concert. “So much fun! Not sure I will ever get to sleep now.”

Pope, a 44-year performing veteran and son of original Tams members Charles Pope (who performed with the band for almost 50 years), is sometimes billed as having “The Fastest Feet in the South” and watching him on and offstage, it was easy to see why.

When asked after the show if he had any kind of special workout routine, Pope, 50, said with a shrug and a grin, “No, not really. I just get up there and do what I’ve always loved doing.”

And another Tam, the third generation of Popes to perform with the group, is waiting in the wings. Mikai Pope, the 12-year-old son of Li’l Redd, donned his own tam to join his dad on stage and show off his own dance moves.

Judging by the smiles on the audience members’ faces and the many who stayed to shake hands, get autographs, buy merchandise or simply express their thanks to the performers in the lobby following the show, the Tams and the 14 Karat Gold Band were a mighty, mighty big hit in the Camellia City.

“This was a great show. I am not quite sure what I expected, but whatever it was, it far exceeded my expectations,” said audience member Vivian McGowin. “So much fun!”

The next GAAC production, featuring Ritz audience favorites Black Jacket Symphony performing the Allman Brothers Band, is slated for January 16, 2020. The Greenville High Band Boosters will present “Christmas at the Ritz: A Celebration of Hometown Talent” at 7 p.m. Dec. 12 at the theater. Tickets for the Christmas performance featuring GHS band members, Ritz Player vocalists, Sonya Sims Rice’s and Susan Andrew’s dance students, the FDA drumline and more homegrown talent, are now on sale at The Vanity, The Pineapple and Bancorp South.