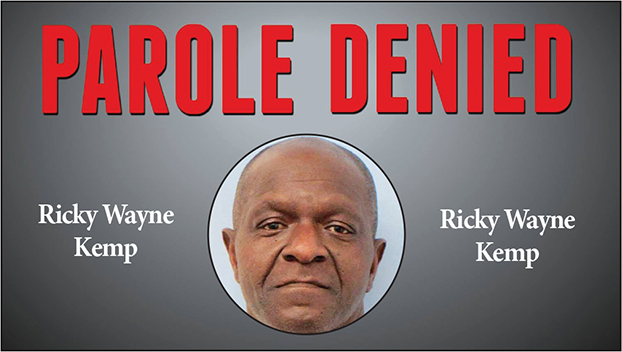 The Alabama Board of Pardons and Paroles denied parole Tuesday offenders including one from Butler County.

All totaled, the board denied parole to 13 inmates and granted parole to one, a non-violent offender on Tuesday and 17 on Wednesday, including inmates convicted of murder, robbery, rape and child pornography.

Ricky Wayne Kemp, 60, was first sentenced in 1982 to six months for third-degree burglary in Butler County. That began a series of criminal convictions over the next 35 years.

In 1987 he was sentenced to two years for two violations of the Alabama Uniform Controlled Substances Act. Kemp was sent to prison for 15 years in 1990 for distribution of a controlled substance in Butler County and 10 years on a 1988 drug possession case in Montgomery County. He was paroled in 1994 but sent back to prison in 2003 for two convictions for distribution of controlled substances in Butler County.

In 2007 he was sent back to prison again on two new drug convictions, and then in 2017 he was sentenced to two years, six months for distribution of drugs, all in Butler County.

The Alabama Board of Pardons and Paroles held hearings for a total of 24 violent offenders this week, including two convicted murderers, one convicted of manslaughter, five sex offenders and nine convicted of robbery. The majority of cases were denied.