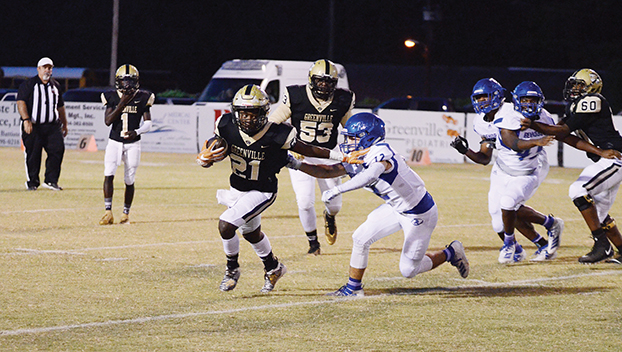 In what proved to be a hard-nosed, defensive battle reminiscent of the past, Greenville suffered a tough 6-0 loss to Rehobeth last Friday night at Tiger Stadium.

“They just played harder than we did, bottom line,” head coach Josh McLendon said. “They played hard up front, on the defensive line. They weren’t really doing anything special, we just didn’t play very well. We’re really young on offense — it’s not an excuse — we just didn’t get the job done.”

Offensively, McLendon said the Tigers could not sustain long drives.

The only score of the game came with 1:11 seconds left in the first quarter when sophomore running back Brandon Austin bulled his way into the end zone from 8 yards out. The PAT was blocked, giving the Rebels a 6-0 lead, which proved to be enough for the win.

“All the credit goes to them; I’m not taking anything away from them,” McLendon said. “They played a great game, I knew that they were improved from past years, I tried to tell our players that, I don’t think we overlooked these guys at all, but they played better than we did, bottom line.”

The Rebels finished 0-10 last season. Following the victory, coach Donny Gillilan described his defense’s play as the kind you “dream” about.

“We played assignment football,” he said. “This bunch took it in the mouth all year, last year. This is the same kids that we were playing as ninth- and tenth-graders. These kids got baptized by fire and worked hard in the weight room in the offseason. Tonight, there was virtually no blown assignments on defense. We got outmanned a little bit and got lazy some on offense, but defensively, our guys played a stellar game.”

A few times during the game, the pigskin didn’t bounce Greenville’s way. Neither did calls.

“We definitely had some tough breaks tonight, but that’s part of it,” McLendon said. “One or two plays — I don’t think — decides a ballgame. There were some plays where the ball didn’t bounce our way, but that’s part of it and you’ve got to be able to overcome those mistakes and get the job done; we didn’t.”

The Tigers have an off week this week to heal and fix mistakes.

“We are going to reevaluate everything,” McLendon concluded. “We’ve got to back to work and get better.”