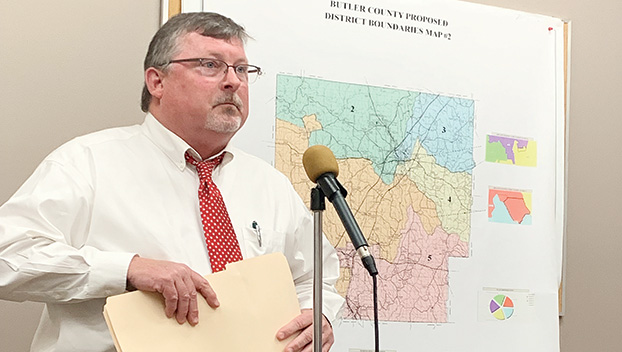 “I think all of you have had a chance to review the Rebuild Alabama Act that was approved earlier this year by the Legislature,” McCall said. “In August of each year, we are to report what the county is planning on doing with this money. At the end of next year, we’ll submit a written report to the transportation committee, which is comprised of 12 members of the House and Senate. We would show them that this is what we said we would do and this is what we actually did.”

The information was submitted based on a format that the Legislature requested from each county.

“There are two funds, the Rebuild Alabama Fund that will be generated from the initial 6-cent tax going into place this year,” McCall said. “That is expected to generate $462,600 this upcoming year. The Federal Aid Exchange Fund is estimated to be $508, 800 this coming year. That amount is what we anticipate receiving this year. Federal Aid Exchange Fund is our remaining balance in Federal Aid Funds that we had for the remaining portion of Gravel Hill Road — the north portion — is exchanging state money for federal money. It will be $400,000.”

McCall recommended four projects for the plan that was to be submitted to Montgomery.

“That includes the north end of Gravel Hill Road,” he said. “It will be a joint project with the City of Greenville. The project is already in line for October with our federal funds — it’s a shelf-ready project. A project on Ridge Road is 2.6 miles and one on Hollyhill Road is 2.3 miles and Peavey Road — a bridge replacement.”

Commissioner Frank Hickman questioned the $400,000 amount from the Rebuild Alabama Act and McCall explained that that was the first year amount. When the tax increases each of the following years.

Hickman noted that the increase was only a little more than $200,000.

“The most important part of the package is the federal exchange,” McCall continued. “It allows us projects we can let (bid) without going through the Federal highway Administration. A simple resurfacing project is right at $80,000 to $100,000 (per mile). Processing that same project through the Federal Highway Administration would be right at $140,000. Your $400,00 will go a lot further. It can be used on rural roads — not just major
collector roads.”

“It is three bridges on Persimmon and Rocky Creek,” he said. “That project lets through the state. We will have the bids received soon.”

McCall also noted that there were two additional components to the Rebuild Alabama Act.

McCall presented a resolution to the Commission and a map showing a proposal.

“This would be to widen, resurface and stripe County Road 22 from State Route 10 at the Greenville Industrial Park,” McCall said. “It’s a 2.4 mile project. A lot of traffic is going on 10 West and this road is often used as an alternate 10 bypass. Traffic on 10 going south can’t negotiate the turn at McBride’s station and the water tank. It’s got a lot of utilities. They can’t negotiate the left turn. This is intersection improvement at AL-10 West at the intersection of County Road 22. This comes at no cost to the county.  It would involve the state, city and county. I think it’s a good project.”

McCall said the deadline for the application was the end of August and that the county should know soon if the funds for projects had been approved.