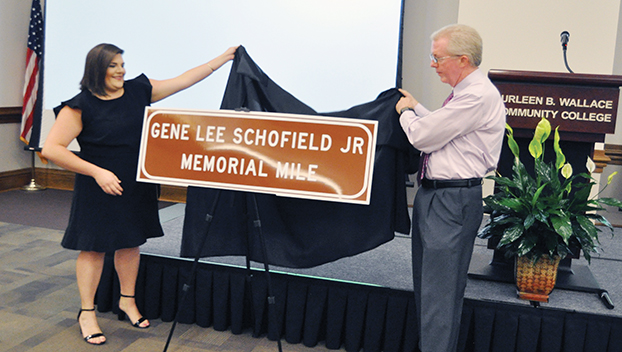 Anna Findley of Heart of the Highway unveils the sign that will be placed on I-65 in honor of her brother as Rep. Chris Sells assists. | Photo by Mark Rogers

When they pulled off the cover of the sign, which will name mile marker 123 in Butler County for Gene Schofield Jr., there were both tears and applause.

As District 90 state Rep. Chris Sells joined Schofield’s sister, Anna Findley, of Heart of the Highway in pulling the cover off of the sign emotions ran high for the family, who remembered Gene from a fateful night in 2016.

Gene Lee Schofield Jr. of Fort Deposit was a tow truck operator for All About Towing in Montgomery. On March 23, 2016, Schofield was performing his job on the side of Interstate 65 when a drunk driver struck and killed him.

Findley went on to create a non-profit organization called “Heart of the Highway” to bring awareness to Alabama’s “Move Over” Law and to all those that serve as first responders, including tow truck drivers.

Last Friday night Heart of the Highway hosted an unveiling ceremony and dinner at the Wendell Mitchell Center on the campus of Lurleen B. Wallace Community College in Greenville.

More than 150 people — most first responders — joined Schofield’s family for the event.  The event opened with a prayer by Butler County Deputy Eric Jackson, who was also Gene Schofield’s pastor.

“Gene’s death and Heart of the Highway have brought attention to the Move Over Law and the countless lives that we save,” he said. “Tonight it’s hard in our loss, but it’s also a celebration. A celebration of the lives that will be saved because of what Alabama has done.”

In his prayer, Jackson spoke of the tow truck operator who was also his friend.

Lowndes County Investigator Jeremy Marvin gave an introduction and told of Gene Schofield’s death and familiarized the audience with the Alabama Move Over Law.

“It was enacted by the Legislature to protect law enforcement, firefighters, to truck drivers and EMTs,” he said. “If you’re on the side of the interstate and you’ve got an 18-wheeler passing by you at 80 mph, the wind gust will pick you up real quick. It was enacted to keep them safe. It is designed to make sure all first responders make it home. Heart of the Highway is dedicated to Gene, but it was done in support of all Alabama first responders.”

Marvin said the Schofield family and Sells worked hard to ensure the bills were passed.

“On May 29, their hard work came to fruition,” he said. “The family and Mr. Sells met with the governor at the State Capitol and Gov. Kay Ivey officially signed the bill naming the 123 mile marker after Schofield.”

Findley shared her family’s grief and the triumph of getting bills passed to keep first responders safe.

“March 23, 2016 changed my life significantly,” she said. “I remember the night like it happened yesterday. I felt so lost standing in the median with state troopers and investigators, the Butler County Sheriff and others. The next morning was no different. I woke up angry, hurt and confused. Speaking for my entire family, we all felt lost.”

After Gene Schofield’s death, his family knew that if they didn’t make it a priority to raise awareness that it could happen to others.

“We dove in headfirst and started finding anybody that would help us,” Findley said. “I was referred to Sgt. Steve Jarrett, commander of the Montgomery Post, and he was really willing to help in any way possible. He helped organize our public service announcements.”

Findley also was introduced to Sells, who eventually sponsored the legislation that would benefit first responders and memorialize Gene Schofield at mile marker 123.

“He said he was expecting my call,” she said. “He has been by my side for the past three years. Not only did he organize the bill signing with Gov. (Kay) Ivey memorializing Gene, but he also passed to bills regarding the Alabama Move Over Law. The first one passed was last year and added Alabama Department of Transportation and tow truck drivers to the Move Over Law. Because of him, I can now say the Alabama Move Over Law covers all flashing lights. The second bill was passed recently and increased the minimum fines and takes effect later this year.”

Sells said drivers are often distracted and don’t even notice what is going on alongside the road.

“Anna deserves a lot of credit — this is very important,” he said. “It takes this kind of determination to make a difference. I’ve operated a wrecker and been on the side of the road. It’s just dangerous. Nowadays we’re all so distracted. We’ve got telephones, children, CD players and radio — people are so distracted — but it’s important that you move over. Now they don’t move over and they’re not even looking at you when they go by. I look forward to doing something with this every year. Awareness is important, maybe someone who didn’t understand the Move Over Law will understand it after reading it or seeing it on TV.”