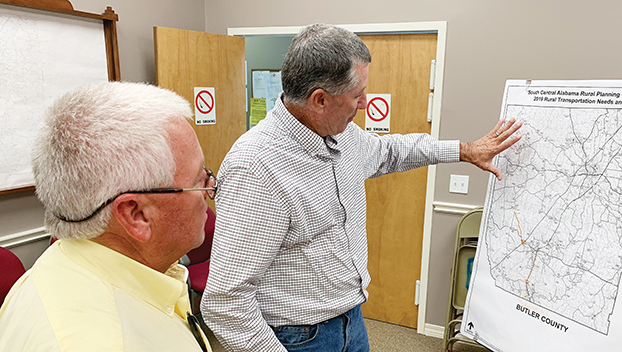 Butler County Commissioners Joey Peavy, left, and Darrell Sanders look over an ALDOT map of the county during the meeting. | Photo by Mark Rogers

An afternoon session in the Butler County Commission office gave residents and county commission members a chance to learn about and voice opinions on Alabama Department of Transportation projects in Butler County and statewide.

The program was part of the Statewide Transportation Improvement Program, which is deigned to identify projects and involves the funding and scheduling of projects on federal, state, city and county transportation systems, multimodal projects (highway, passenger rail, freight, public transit, bicycle and pedestrian) and projects in the National Parks.

ALDOT has developed the STIP program in accordance with the Fixing America’s Surface Transportation (FAST) Act and developed coordination with metropolitan and rural planning organizations. During last Thursday’s session at the Butler County Commission offices, a variety of maps and half a dozen ALDOT employees were on hand to discuss the state’s plans and the county’s needs.

Commissioners Darrell Sanders and Joey Peavy joined other local and city representative in looking over the maps and discussing items with ALDOT officials.

“My main focus with the situation at Exit 114 is the lack of turn lanes near Fred’s and on 55 in McKenzie,” Sanders said.

Sanders and Peavy said they have received many calls from Butler County residents concerned with the changes at Exit 114 where ALDOT removed stop signs on the exit ramp and placed them on Alabama Hwy. 106 instead. Residents and county officials are concerned that during high volume traffic times backups will occur and the risk is greater for accidents.

Also among the county’s other concerns is County Road 17, which is heavily traveled by log trucks and residential traffic and is in need of resurfacing.

Attendees had the chance to look at statewide plans as well and one of the items seen on the plans is renovations to the rest areas on I-65 near Greenville.

ALDOT is accepting comments about the plan and can take input on rural transportation issues that can be emailed to rpo@scadc.net or faxed to (334) 271-2715. Include the county name, road name and location, and a detailed description of the issue in the email. Comment forms and other information are available at scadc.net

The draft of the state’s plans for 2020-23 is available for viewing at the SCARPO offices, located at 5900 Carmichael Place in Montgomery. Comments on the state plan will be accepted until June 21, and should be forwarded to State Office Engineer, Alabama Department of Transportation, P.O. Box  3050, Montgomery, AL. 36130-3050. Comments may also be submitted electronically on ALDOT’s web page: www.dot.state.al.us Click on: DRAFT 2020-23 Statewide Transportation Improvement Program.

Commissioners also discussed additional funds that will be coming to the county with the new gas tax, but warned that even though Butler County will receive an additional $700,000 in revenue, the money would go quickly as paving costs equal more than $100,000 per mile.

“It’s not a fix-all,” Sanders concluded.