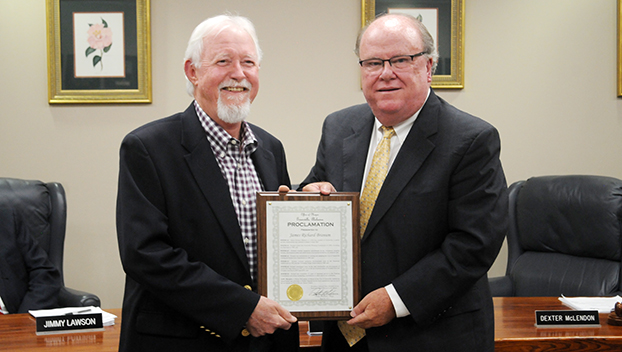 Two public hearings and one council meeting later, a portion of Executive Drive has been vacated and the property at 909 Fort Dale Rd. has been rezoned, paving the way for Zaxby’s to arrive in Greenville.

Mayor Dexter McLendon said that it has taken six years to get to the point where the Greenville City Council was able to vote on the two issues, preparing the way for the chicken restaurant to build.

“The road (Executive Drive) will be rerouted and traffic will come out at the light on Fort Dale Road,” he said. “This should help with some of the problems there.”

Nobody spoke up in opposition or in favor to either action. A 5:15 p.m. hearing at City Hall took less than a minute regarding the vacation of a portion of Executive Drive and the 5:25 p.m. hearing on the rezoning at 9:09 Fort Dale Rd. was equally short. The Council voted yes to both issues quickly during the regular 5:30 p.m. meeting.

“Richard was instrumental in creating and adopting the City of Greenville Zoning and Subdivision regulations in 1996,” McLendon said. “You made a difference in a good way.”

Branum also oversaw numerous developments such as the Sherwood subdivision and the Cloverdale Ridge subdivision. He also contributed input on the road construction and development of the new Greenville High School in 1997, as well as development plans at Hyundai Steel and Hwashin America in 2003 and 2005, respectively.

The Council also signed a five-month contract with Bruce Edwards to become the manager at the city’s Mac Crenshaw Airport. The contract specifies the duties of the manager and sets Edwards’ salary at $3,041.66 per month. The city and Edwards have the right to renew the contract on Oct. 1, the beginning of the new fiscal year.

The Greenville City Council also approved authorizing payment for municipal insurance coverage for the period from April 20, 2019 through April 20, 2020. Cost is $172,085.

The Council also approved a payment of $32,305.17 to Opelika Chrysler, Dodge, Jeep, and Ram, for a 2019 Dodge Durango. The Drug Task Force will reimburse the purchase.

The Council also approved $4,870.50 (budgeted item) for uniforms for the city’s 32 teams in baseball and softball.

The next regular meeting of the Greenville City Council is set for 5:30 p.m. on May 13 at City Hall. The May 27 meeting is being moved to May 20 due to the Memorial Day holiday.