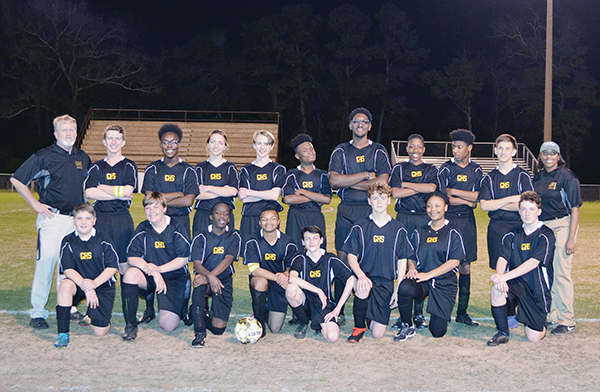 The new soccer program at Greenville High School is off to a kickin’ start after a 5-0 win last week over Autaugaville.

“It’s a great way to start the program  — with a win at home,” coach Joe Pouncy said. “A lot of hard work went into it from the kids to the school administration and even the school board.”

Pouncy said he was glad to be a part of the birth of the soccer program at GHS.

“When I got the job here, I knew that a soccer program was on the horizon,” he said. It had been discussed last year. Interest began to stir. We held informational meetings for players and parents. Nearly 80 people showed up at the first meeting. It’s gone from there.”

Pouncy said the current team has 17 members and is co-ed.

Pouncy’s squad consists of students in seventh through 12th grades. In the first game, William Luke Hendrick and Levion Adams each scored two goals apiece and E’Jontae Johnson scored a goal. The team has a home game at 4 p.m. Thursday at Tiger Stadium.

“We’re looking forward to a good first season,” Pouncy said. “We’re glad to get it going and it’s off to a good start. Since we’re just getting it off the ground, we didn’t want to overload the schedule. We’ve had plenty of opportunities to play in Birmingham and up north. We’ll look to branch out next year.”

Soccer is growing in popularity in Alabama, according to Pouncy, so adding a program at GHS made sense.

“It’s a little more popular in the northern part, but if you’re starting a program, you’re growing,” he said. “The YMCA has an active soccer program here. There’s a lot of optimism for ours. We’re looking at a middle school program in the future, too.”

Pouncy said his assistant coach; Rachel Jackson has been “a tremendous help.”

“The administration at Greenville High School has also been very helpful,” he said. “Dr. (John) Strycker has been a big fan.”