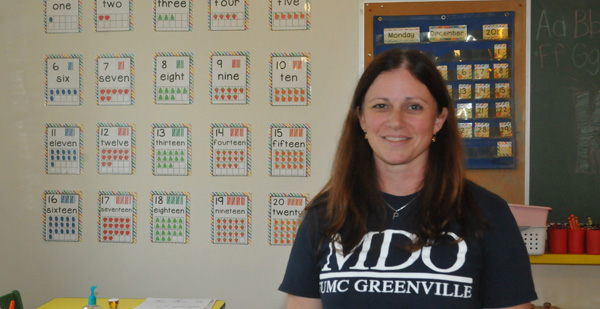 Greenville First United Methodist Church will soon replace one familiar face with another at the position of children’s director at the beginning of the year.

Nikki Patel, who has been the church’s children’s director for nearly two years, announced in November that she is moving to Troy. Patel has also taught science at Greenville High School while working at Greenville FUMC.

“I accepted a job at Charles Henderson High School and will be working at Park Memorial United Methodist Church in Troy as the youth director,” she said. “I’m excited for the new opportunity, but I also know that I will miss Greenville. Greenville is home for me.”

Amanda Crenshaw will officially take over as children’s director on Jan. 1, 2019. Crenshaw has worked in the church’s Mother’s Day Out program for two years. She and her husband, Dave, are Greenville natives. They have a 10-year-old son, Parker.

“I’m very excited to be taking over as children’s director, but I have so much respect for Nikki,” Crenshaw said. “She has always done such a good job with the kids. She adds energy, she makes it fun and does a great job of loving the kids. I want to continue on what she’s been doing.”

Crenshaw said FUMC’s Children’s Church is a welcoming environment for all children in Greenville. Patel added that she has a great deal of confidence in Crenshaw.

“Amanda is the perfect person for the job,” she said. “She’s going to do a great job. The kids trust her and her husband is very involved with the youth as well. I’m going to miss the kids and the people in Greenville. They’re such a loving, supporting church family.”

Crenshaw said she’s wasted no time when it comes to getting ready for her new role. Events six and seven months away are already being planned.

“Vacation Bible School and kids camp in June and July are quite an undertaking,” she laughed. “But we’re planning all of those now and looking forward to them. I’m thankful and happy to have taken over as children’s director.”