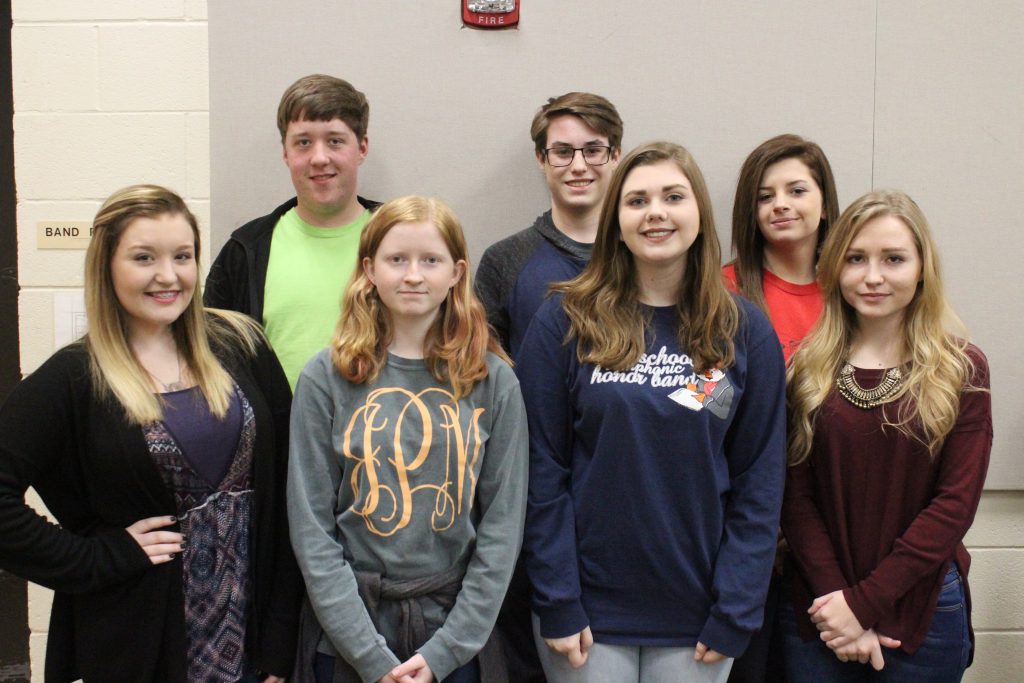 During the month of February, multiple colleges around the state have offered honor band opportunities to high school band members. Students from Brantley High School’s Emerald Wave Marching Band recently participated in bands a Troy University, the University of Alabama and Auburn University.

Over the course of the last two weeks, members of the Brantley High School Emerald Wave Marching Band had the chance to participate in three different honor bands on the campuses of the University of Alabama, Auburn University and Troy University.

During the weekend of Feb. 2-4, three BHS students traveled to Troy to participate in the Troy University Southeastern United States (SEUS) Honor Band.

“The students also have to audition for a chair placement at each honor band, so this is something that they have to work towards for several weeks before they even get to the university campus. Working on audition music pushes the students to expand their musical capabilities.”

That same weekend, two students traveled to Tuscaloosa to participate in the University of Alabama High School Honor Band.

“The students get to play in an ensemble that is almost four times the size of their local ensemble. This size of an ensemble is similar to what they might play in should they decide to be in band during college,” McGlincy said.

“They also get to play with other talented high school musicians throughout the Southeast and have the opportunity to make new friends. Another opportunity the students have is working with the wonderful guest clinicians at the honor bands. Often, these clinicians have traveled and performed around the world, and they have a lot of knowledge that they can offer the students.”

Harrison Weed, BHS sophomore, has been a member of the Emerald Wave for many years, and has participated in several honor bands throughout his seventh through tenth grade years.

Weed is a low brass player, and hopes to continue with his pursuit of music after high school because of the impact it’s had on his scholastics and life as a whole.

“It’s been proven that musically inclined students are better advanced in classes. We kind of think more and are more actively involved,” he said.

“This was my first time going to Troy and Auburn, but I’ve been in Crenshaw County’s honor band. Being in a big band was nice,” she said.

With these bands now under their belts, the students are not only grateful for the experience, but are also ready and waiting for their next opportunity.

“The ability level is also heightened at honor bands, which is also a closer equivalent to performing in college. Many of the honor bands hosted at college campuses give students the opportunity to audition for music scholarships,” McGlincy said.

“Many universities offer hundreds of thousands of dollars in music scholarships each year, so knowing how to play a musical instrument definitely has its advantages in college.”

The Emerald Wave now continues to prepare music for an upcoming countywide honor band workshop, which will take place at BHS on the weekend of Feb. 24.