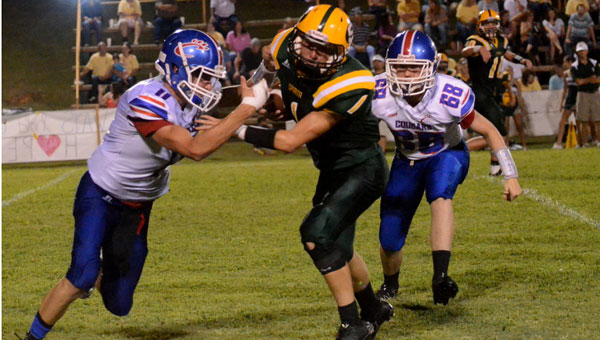 After a less-than-satisfying loss to the Lowndes Academy Rebels last week, the Crenshaw Cougars traveled to Evergreen, Alabama, Friday to face the Sparta Academy Warriors.

After being nearly shut out by the Warriors last year, the Cougars took the field with confidence this time, eager to put their ideas of a season themed around the word “change” into action.

Then the game started, and the Cougars turned the ball over on their very first possession; the Warriors scored.

Then the visiting Cougars’ sideline went noticeably quiet as the Cougars turned the ball over again.

The Warriors answered with another touchdown.

In six minutes of play, the score was 14-0 in favor of the now-comfortable Warriors. Little did the hosting Warriors know that they would only score once more throughout the remaining 42 minutes of play.

Crenshaw began their attack of unanswered points with the State of Alabama’s leading rusher, junior Quashaun LaPrade, and never looked back. LaPrade boasted 28 carries for 293 yards, three touchdowns (two touchdowns of 32 plus yards) and a 2-point conversion.

Senior quarterback Cole Roper also proved to be a crucial part of the Crenshaw offensive attack once again, with 18 carries for 69 yards and 90 passing yards, including a 55-yard touchdown pass to junior Ben Archie.

A shining defense and special teams unit proved pivotal for the 2-3 Cougars this week.

Special teams sparks include senior specialist and wide receiver Billy Wright, who tacked on multiple 20 plus yard kick and punt returns.  Sophomore Logan Johnson returned a punt one yard off of a block for a Cougar touchdown.

The Cougars’ combined effort resulted in a winning score of 42-20.

“We won despite losing the turnover battle. A win is a good thing, but we will not continue to win if we don’t fix the problem. We have lost the turnover battle in every game we’ve played so far, and that’s something we have got to fix,” said CCA Head Coach Mike Sims.

The Cougars will travel to Montgomery to face the Evangel Lions on Friday.