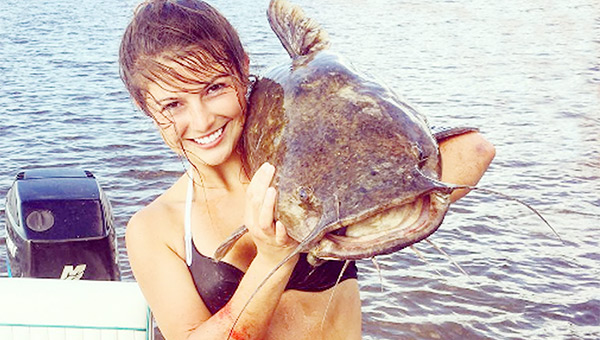 When Hannah Barron set out on her day of noodling, she never dreamed that she would become as virally famous as she is now. Barron is a former student of Brantley High School.

A self-proclaimed tomboy, the LBWCC alum loves the outdoors, and recently her love for noodling went viral.

“It’s just a video of me catching a decent size catfish,” she said. “I’ve caught bigger ones than that.”

Barron posted a video of a 30-pound catfish to Instagram and Facebook and the rest is history.

“One site it got 15 million views and the other page it got three or four million,” she said.

Those numbers were garnered in one week’s time.

Fox Sports’ The Buzzer shared the video and got nearly 800,000 more views last week when it shared Barron’s video.

Barron said she recently had Total Outdoor Pursuit film a day of noodling. The show will air on Hunt Channel in August.

The number of views and attention she’s getting from her video surprises her.

“I was just posting it,” she said. “I didn’t know it would go viral. I’ve had several people wanting to talk to me about licensing.”

It’s a Southern tradition of using one’s bare hands to catch catfish in a discovered hole.

The Barrons noodle during the summer months, when catfish are bedding and laying eggs.

Barron said, “You literally go under water and stick your hand in a hole and wait for it to bite. You have to hang on when it bites. It feels like sandpaper and it hurts. You wear gloves.”

“It’s the biggest adrenaline rush you can think of,” she said. “It’s like killing a deer.”

They primarily catch blue cats and flatheads, upwards of 60 pounds.

Barron, who is an avid outdoorsperson, said she would love for her viral video to turn into a career.

“That’s something I would love to do,” she said.