Williams sworn in as councilwoman 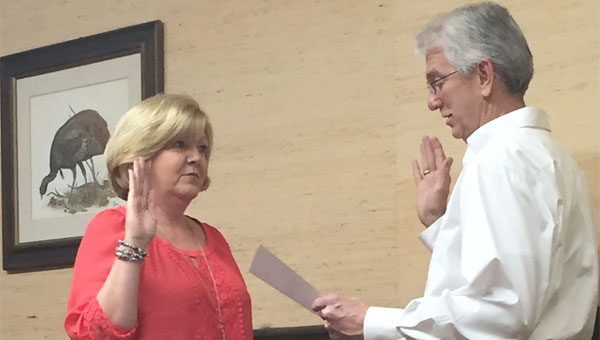 At the recent City Council meeting, Wanda Williams was sworn in to serve as the District Three representative. (Photo by Beth Hyatt)

Being no stranger to the office of councilwoman, Wanda Williams has returned to the vacant seat of District Three after the resignation of Jerry Sipper.

At the recent City Council meeting, Williams was sworn in to take the office of District Three councilwoman. Williams had previously served as councilwoman for District Three before Sipper took office, and was more than happy to lend a hand when she was called upon to fill the vacancy.

“Now I just want to do anything that will give back.”

Having served in this capacity before, Williams still believes that the most important aspect of the job is listening to the people, letting the people have a voice and working together with the citizens and fellow council members.

“I’m not confrontational; I don’t do that. I just think if everyone works together we can really make Luverne great. It already is great,” Williams said.

While Williams is currently the only woman to have a seat on the council, she does not believe that gender will have any kind of effect on her or her fellow councilmen.

“I think we’re all equal there. I don’t see myself as being any different than the guys on the council,” Williams said.

“Before we worked together really well and I don’t see that being a problem this time at all.”

Even though her time on the council is slated to be short term, Williams still hopes to accomplish a few things while in office. Her goal is to help the council, as well as the city, stay unified and focused on what needs to be focused on, which is, according to Williams, “the work at hand.”

Williams will serve out the remainder of this term. At the completion of her term, she will then be eligible to run for the office, but has already decided that she will not.

“I told them going in that I would be glad to help in any way I can, and I’m thankful and humbled that they asked me to do this, but I do not want to run,” Williams said.

“I am here for what is good for the people, and I want us to be unified and work together as a city.”

“This is nothing new. This has been standing orders from the time of former Mayor Sport’s regime. What brought it... read more