Matthews honored by U of A

Anne Matthews, a junior from Greenville, was recently selected for several honors at the University of Alabama.

During Honors Week earlier this month, the university recognized the achievement of outstanding students and faculty, culminating in the Tapping on the Mound ceremony on Honors Day.  On the Monday of Honors Week, Matthews was tapped into the 28th Order of The XXXI Organization, the only all-female honor society at the university. 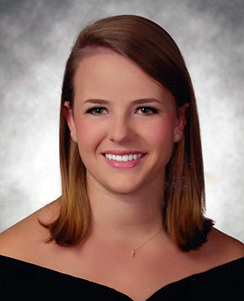 The XXXI honors 18 of the most outstanding junior women who have shown great commitment to the university through service, leadership and character.

On Honors Day, Matthews was tapped into three honorary organizations – Omicron Delta Kappa (ODK), Mortar Board (Secretary) and Blue Key Honor Society.  In addition, she was inducted into Order of Omega Greek Honorary and was named its Outstanding Junior.

Matthews is majoring in business management with a specialization in human resources.

At the university, she serves as a member of the Capstone Men and Women and the Blackburn Institute. She is a 2013 graduate of Fort Dale Academy and is the daughter of Elizabeth and Warren Matthews and the granddaughter of the late Anne Crume Stabler and Dr. Paul A. Stabler, Sr.