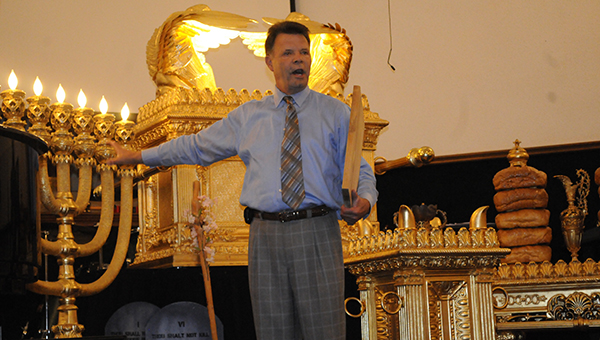 David Hamilton, the proprietor of Mishkan Ministries, combined his passions for ministry and 16 years’ worth of architectural knowhow and general contracting in an effort to educate the masses on God’s plan by building a reproduction of the Tabernacle. (Advocate Staff/Jonathan Bryant)

David Hamilton of Mishkan Galleries and Gardens owns several of the world’s largest private collections of biblical reproductions in the world, and the second-largest of those collections was on display at First Assembly of God from through Wednesday.

Hamilton, the proprietor of Mishkan Ministries, combined his passions for ministry and 16 years’ worth of architectural knowhow and general contracting in an effort to educate the masses on God’s plan with the help of visual aid.

“The Tabernacle was intended to be a visual aid for teaching Israel, and also for us today,” Hamilton said.

Hamilton’s constructions include painstakingly detailed recreations of other items detailed in the Bible, such as the Ark of the Covenant, the Table of Shewbread and more.

In addition to the items housed at the gallery in Mobile, Hamilton’s work extends to the Holy Land Experience theme park in Orlando and the Noah’s Ark tourist attraction in Hong Kong.

Hamilton said that he’s always enjoyed working with his hands, though he couldn’t take full credit — or any — for his works.  After all, the blueprint has been laid out for thousands of years.

“I am not the designer.  I’m just the maker of them,” Hamilton said.

“These are described in the Bible as God described them to Moses.  What Moses built was what the Bible called a pattern of what’s in Heaven.”

Hamilton’s final class will be held at First Assembly of God Wednesday at 6 p.m.